When I first mentioned Halloween to Cale earlier this month, I was met with a completely blank stare. He had no idea what I was talking about. After being in Jamaica last fall where Halloween isn't celebrated, he had absolutely no memories of Halloween. I started explaining it to him, and as you imagine, for a 3 year old this was sounding better by the second. When I got to the part about going to people's doors to collect free candy, he was blown away!
I asked him: "Do you know what you say when you knock on the door?"
Cale: "No, what??"
Me: "Trick or treat!"
Cale: "Trick or what??!"
Me: "hahaha!"

And then I asked him what he wanted to be. He could dress up as anything. He was quite excited about the pumpkin carving, and he loooves boats and pirates, so it seemed to make perfect sense when he immediately replied - "I want to be a pirate pumpkin!". And that was that. One trip to Frenchy's and $3.00 later - we had ourselves a pirate pumpkin costume! His teacher was quite impressed, not once in her 28 years of running a daycare had she ever seen a pirate pumpkin.

The big day grew closer and, before we knew it, late October was here and we were heading to Truro to visit Aunt Sarah and meet Caleb's new baby cousin Jack. Sarah went above and beyond in planning a fantastic Halloween party, so Cale got to wear his costume, carve pumpkins, play games, eat candy....and Jack was pretty wonderful, too!

Tonight is actually Halloween and I think Cale is finally asleep upstairs. He had quite a day - trick or treating downtown with his daycare and out again for round 2 with me tonight. We visited a few houses, collected some treats, met some neighbours and then headed home for what turned out to be the best part of his day - handing out the treats. He was so excited - dishing out handfuls of candy - he even offered to give out his own candy after we ran out. What a special night and what a special guy!

There is no better place to be on a sunny October day than driving through the Valley on route to a country farm. This was not just any farm, but Noggin's Family Farm, and after reading the website I had high hopes. Noggin's promises a giant corn maze, play area, wagon rides and U-pick apples, pumpkins and flowers. Wow. The farm happens to be exactly half way between Annapolis Royal and Halifax, so I invited a few friends and their kids to meet us there. Noggin's did not disappoint! The play area alone was worth the trip - giant hay bale and tire structures, water games, tunnel slides made from old pipes, and several different mini-mazes. The giant corn maze was actually enormous - apparently it can take well over an hour to get through it all. We opted for the mini-corn maze which was perfect for the kids. It even had mailboxes along the way with stamps inside they could  collect and fill up a special card they'd been given.

The U-pick was also a huge success. I loved the 'all you can eat while picking' policy and somehow, despite the place being packed for weeks on end, there were tons of perfect apples to be picked that were just the right height for the kids! I already can't wait for next year...although I just might end up going back next weekend! 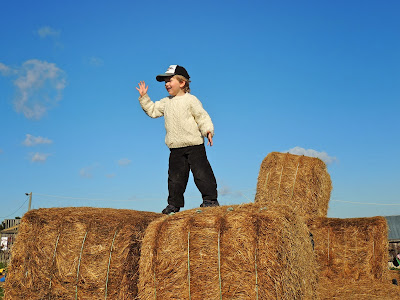 After the last post about my spell of bad luck, it's time to write about something positive - my love of the Annapolis Valley. It seems like we are constantly discovering new gems - local peaches and pears (grown only minutes away from our door), little roadside stands where you drop money into a jar and pick up a dozen eggs, a jar of honey or a bouquet of flowers, and wonderful trails and parks. Our current favourite park is Mickey Hill Provincial Park, a small but beautiful area with private picnic tables beside a perfect stream, a 1 km trail to a gorgeous lake with a sandy beach - the perfect hike for a 3 year old.

And we are just getting started, there is so much more to discover - corn mazes, u-picks, Keji national park, the King's Theatre, restaurants, shops, galleries...it will make for a fall full of amily adventures!