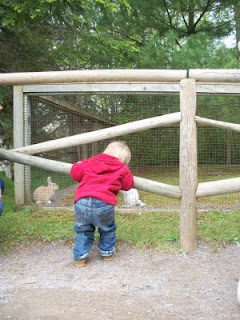 To celebrate Alan's homecoming and Caleb's return to good health, we spent a family day at the Shubenacadie Wildlife Park. I've been waiting for months to show Caleb real animals so that he knows they exist outside of youtube, so I was really excited when I found out about this park which is near Stewiacke. It is run by the Dept of Natural Resources and most of the animals were raised in captivity at other facilities, some were rescued from homes where they were kept as pets, and many were found injured and cannot be released back into the wild. They have large enclosures with lots of natural habitat. We spent the afternoon looking at fox, wolves, bears, skunks, birds of prey, owls, waterfowl and many, many more animals. We all had a great day and I'm sure we'll be going back sometime soon. 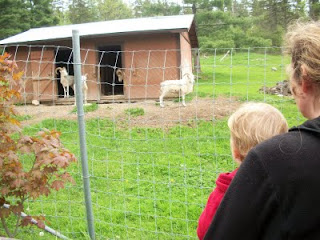 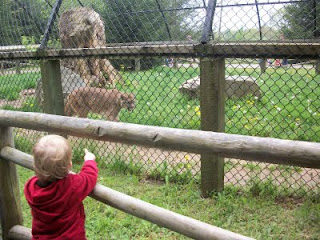 Lots of 'Roarrrrs' for the cougar 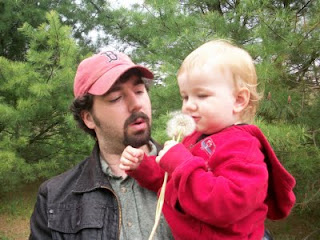 First time blowing dandelion seeds, and yes, he did eat a few 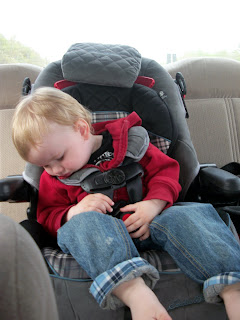 Way home after a great day
Posted by Ashley at 6:10 PM 1 comment: 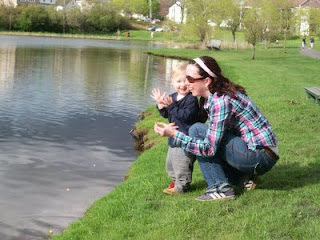 Waving to the ducks with Sarah

Caleb and I are back in Fredericton for the long weekend and our trip started out wonderfully well. We left Thursday after work and stopped in Truro for a wonderful picnic in the with Sarah. Caleb fell completely in love with the ducks - waving, saying hello and quacking at top volume. I thought he would sleep soundly for the rest of the drive home. Instead, he was whiny and unable to settle. I drove through the tears, determined to make it home at a good time.

Thursday night Caleb came down with a fever. His little body was burning up and he was having trouble sleeping. I knew he was sick when in the morning he could barely manage a smile when he saw Greggy and Linda. He spent Friday and Saturday wanting to cuddle and rest while refusing food (but wanting to nurse lots). We gave him tylenol which would bring his fever down for a few hours and he would perk up and start acting a bit more like himself, but as soon as the medication wore off, he was hot, sick and in tears again.

Sunday morning we tried to take him out for a family breakfast, thinking he must be on the mend, but he couldn't stop crying was clearly not better yet. By the time he got home, his temperature was 104 (39.9) and I had never felt a person so hot in my life. My mom and I decided we needed to take him to the emergency room right away. 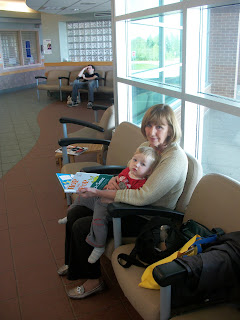 We stayed for 7 hours - blood tests, urine tests, a chest xray and lots of tears later, we were told he had an undetermined viral infection and a high white blood cell count. His temperature had dropped so after meeting with the pediatrician, we decided to take him home. It was truly the longest day of my short life as a parent. I was really concerned that we still didn't know what the virus was. Thankfully we met with a great pediatrician who said to call her immediately if we saw any change.

Today Caleb was still not 100%. He had a fever again through the night and most of the day. Instead of driving home, I decided to stay in Fredericton for one more day to let Caleb rest. We have the pediatrician on call if anything changes, so I feel much better staying here instead of heading home by myself. At about 3:00 today I noticed some fluid in Caleb's ear. Even though they had checked his ears out yesterday, I still thought I should call the pediatrician to let her know. She said to bring him to the hospital immediately. Once there, she took one look at his ear and said that his eardrum had ruptured. Apparently it will heal on its own and he would have immediately started to feel relief.

Sure enough, it is now bedtime and he is once again smiling and sitting beside me eating a cracker. He isn't completely better, but just knowing what the problem was makes me feel a much better. He has to take antibiotics for 10 days to deal with the infection and go to see his doctor in Halifax in a week to make sure the eardrum is starting to heal.

I sure wish Alan was here, but he still has a few more days on tour. He'll be getting some big hugs as soon as I see him. I'm sure lucky to have such a great support system here. There were lots of phone calls to check in on Caleb and lots of offers to help out. Today he just needs to be near his mommy and the 'nu-nus'. Although I've been wishing he would start weaning soon, I was really glad that he was still nursing this weekend. It was the only thing that could comfort him at times and is kept him from getting dehydrated. I am a bit scared that I will lose my superpower once he is weaned, but I'm sure I will find other ways to comfort him when the time comes.

Lessons learned - symptoms can change quickly, so call your doctor if you notice something seems to be wrong, even if they just checked him the day before. Rely on family and friends to help when you need it. As hard as it was to watch Caleb having blood squeezed out of his finger and to hold his hand while he was being x-rayed, I felt lucky so, so lucky to have a healthy child. I can't imagine how heart breaking it must be for parents with kids who have serious illnesses and are frequently in the hospital. Knowing your child is hurting and feeling helpless to help is truly heartbreaking so be grateful and appreciative for your healthy child and give them all the love you can when they do get sick.
Posted by Ashley at 10:17 AM 1 comment: 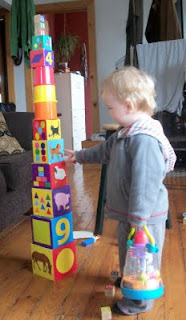 Our morning started at 6:00. Caleb still comes in to bed with us when he wakes up at 6, and we cuddle for awhile until I feel ready to start my day. Alan had to work early today, so we ended up having a nice family pancake breakfast at 6:15. I still can't quite believe that this is my new schedule. Even though Caleb is still at home with us 5 days a week, something feels special about a weekend morning. More relaxed, no pressure to check emails, no calls to make...just time to sit on the floor and play. 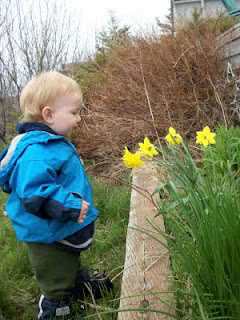 This morning we built and knocked over several towers, each one taller than the last. We raced cars, sang songs, played with our hockey sticks and then headed outside for a leisurely walk. We found lots of puddles to throw rocks and splash in, smelled flowers, threw sticks, saw a rabbit AND a fox and were home in time for a snack and nap at 11. And now, both rested and happy, we are ready to do it all again this afternoon. 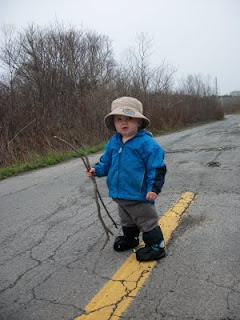 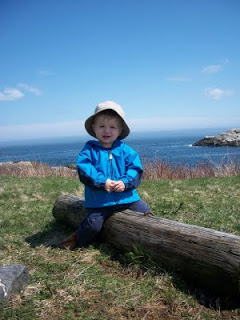 Alan is heading to N.B. this weekend, so we've been celebrating Mother's Day early. A dinner out on the town on Thursday followed a sleep in until 8:00. I'm sure Alan would have let me sleep longer, but that was the time that Caleb came bursting through the bedroom doors. We had a Mother's Day BBQ last night complete with my favorite coconut shrimp appetizer. Delicious. Either I have the best husband in the world, or I'm milking this for all it is worth. Probably a bit of both, but what can I say, it's fun to celebrate a new holiday!

I'm feeling a lot of pride, amazement, joy and hope this Mother's Day. I'm so proud of the wonderful little boy we've created, amazed by how much he has learned, his super sweet and kind personality and how unbelievably adorable he is, overjoyed with being a mom and a family, and hopeful that I might squeeze one more nice dinner out of this on Sunday night when Alan returns home!
One quick nature note - the latest species added to my Duncans Cove list is the brown-headed cowbird. These guys have an interesting strategy for raising their young. They are nest parasites so they don't build a nest of their own, but instead lay eggs in the nests of other birds and hope that the mother of that nest will look after the egg and raise the young once it has hatched. So there is no parenting required on the part of the cowbird, but a lot of extra work on the parents of nest they take advantage of. This was a fun bird to see and the best part is that it was Alan who noticed that it was a different species in the yard! 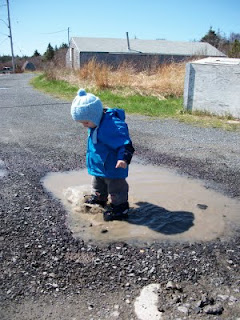 Best discovery of the Spring - the joy of puddles!