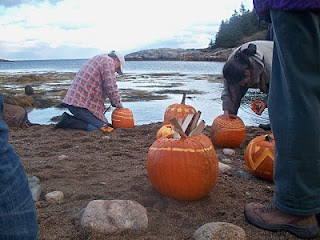 Final pumpkin preparations
Today Caleb and I headed to the beach to watch the 9th Annual Duncan's Cove Pumpkin Race. On Halloween weekend each year, everyone from the Cove brings their carved pumpkins to the waters edge as the tide begins to go out. Each pumpkin must have a candle placed inside. The winning pumpkin is the first float pass a designated buoy, with the candle still lit! Unfortunately, our car broke down in town yesterday before I was able to pick up my pumpkin so we didn't have an entry this year. Many of the pumpkins made it out to sea, but several took in water and sunk. It was really a sight to see. Afterwards there was a wine and cheese party (as well as the trophy presentation) at a neighbours house, so Caleb was able to make many new friends. He basically crawled around until he ran into a pair of shoes, then he would pull himself up and stand there tugging on the persons pant legs until they picked him up! I'm sure everyone at the party held him at some point, and he was as mellow and content as ever. He seemed just as happy in my arms as he was in the arms of a complete stranger. I'll post some more Halloween pictures tomorrow as well as an exciting sleep update!

I also have one new bird for my Duncans Cove list - the snow bunting. The books say they typically arrive in coastal areas around the Maritimes at the end of October, so this guy was right on time! 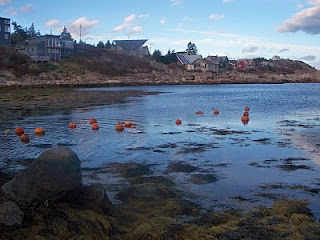 Heading out to sea
(and don't worry, only biodegradable products were allowed!)
Posted by Ashley at 8:27 PM 1 comment: 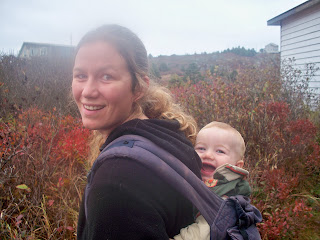 I love my Ergo baby carrier. Thanks again, Harris! It is super comfortable for both of us, easy to travel with and works well for babies of all sizes. I think we started using this when Caleb was still only 3-4 weeks old. We have recently graduated to the backpack mode, and Cale is loving it!
It's been awhile since I've posted a video, and Caleb has gone through many milestones in the past few months, so I've put together this little video montage! He seems to already enjoy hamming it up for the camera.

Times they are a changin' 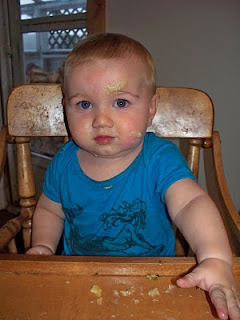 "Hey mom, do I have something on my face?"

I think the changes over the past 3 months have been the most dramatic by far. At almost 9 months, Cale now loves to feed himself all kinds of different foods. He is completely mobile, crawling at both a regular and high speed and is pulling himself up on everything in reach. He loves flipping through books and point at things. Pat the Bunny is a big hit right now. He is delighted when I let him touch the branches and leaves that he points at while we are out on walks. I love that he still smiles all the time and is more interactive than ever. I can't wait to see how much he weighs at our next doctors appointment. I don't think his cheeks could be any more round! 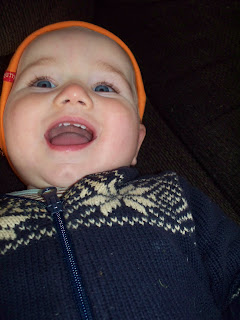 Flushed cheeks and a toothy smile
Posted by Ashley at 5:00 PM 1 comment:

Just the two of us 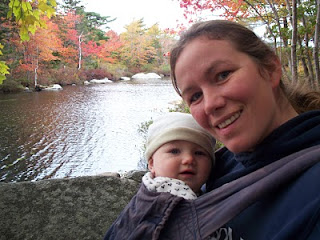 Cale and I had a quiet weekend while Alan was away. I found time to stock up on homemade baby food, go for several nice walks, finish the third Stieg Larrson book, The Girl who Kicked the Hornet's Nest (so good!), have some wedding talk with Lydia and even watch some chick flicks (Sisterhood of the Traveling Pants part 1 and 2 - made me wish Lyd, Amy and I had an item of magical clothing to share...maybe it's not too late!!).

We did a new trail today - Frog Pond in Purcell's Cove - which was beautiful. Two loops around took us 1 hour. I always laugh when I walk with both Caleb and Arlo that the people we see are either 'dog people' or 'baby people'. Often people will say something like 'Oh, how cute' or 'What's his name' and I have to quickly decide if they are talking about my baby or my dog! Today it was all 'dog people'! Poor Cale could have been invisible! I have never heard so many 'Look at him, he is sooo sweet'.....and as I smile down lovingly at Cale, they continue 'I just love beagles'!! 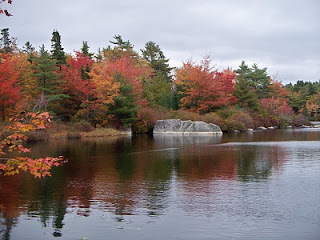 Beautiful leaves on our hike
Posted by Ashley at 6:51 PM 2 comments:

After several beautiful days of sunshine, we woke up this morning to rain, strong winds and big waves. We even lost power for a few hours, which is a first since we've been living in the Cove. Grammie Jeffries found a great link to a webcam at the Chebucto Head Lighthouse where we live. There isn't any fog today so you should be able to get a good look at the size of the waves by clicking here.

Alan headed off this morning for shows in Ottawa and Manitoba, so Cale and I had to brace the storm in order to take Arlo for a walk. We came back soaking wet and I decided the best remedy would be to start a nice fire and take a warm bath. I'm happy to say that we'll be back in the sweet sunshine soon enough - we just booked tickets to Barbados in December for Lydia and Nick's wedding! And my parents are also coming so the babysitters are on board!! Can't wait for a getaway with family and friends. 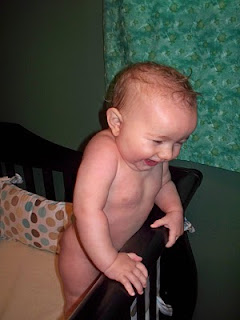 Plotting a post-bath getaway!
Posted by Ashley at 1:07 PM No comments: 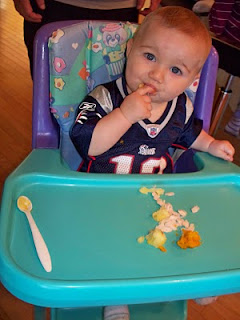 Caleb (in his Tom Brady jersey) eating his turkey dinner. He would much rather feed himself with his fingers these days than by spoon fed now that he has mastered his pincher grip!
I have so much to be thankful for this year. Mostly I'm thankful for our healthy and happy baby boy and the wonderful family he has who love him. I don't think Cale could ever have asked for better grandparents, aunts and uncles, cousins and friends. I'm very thankful for my one year maternity leave that has allowed me to make so many trips to Fredericton. I've reconnected with friends in the States on facebook who have only 6 weeks maternity leave which I couldn't even imagine. We were home again this weekend for both a delicious turkey dinner made by my mom and for a special musical event. Eric Leblanc, who is a good friend of both our families and like an uncle to Alan and I, had a CD release concert Saturday night for 'Thirty and Thankful' an album that celebrates the Grass Circle Jam, a group of friends who have gotten together to play music together at Eric's house over the past 30 years. Eric is actually the reason Alan and I are together today! He was the one who told me to take guitar lessons from a young man named Alan at Freddy's Music Store 9 years ago! So I'm very thankful for Eric, as well! 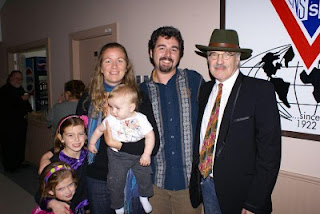 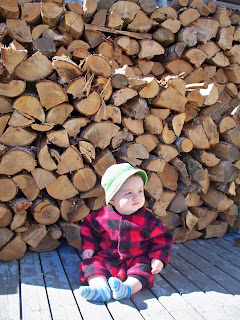 Well fall is officially here. Our three cords of firewood are nicely piled on the deck although we haven't needed our first fire just yet. The days are still sunny and warm enough to quickly dry our clothes and diapers outside. I made a delicious squash, ginger and apple soup the other day which made a perfect lunch for a fall day and a great remedy for the colds we all have. I packed up all our summer clothes and hung our sweaters in the closet. I couldn't resist stopping for a quick photo shoot midway! 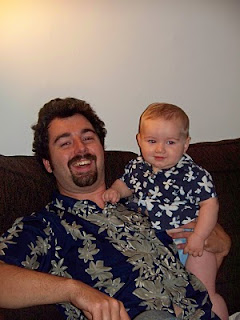 We've been seeing tons of deer on our walks lately because most of the leaves have already fallen (thanks to Hurricane Earl). It always amazes me how quiet they are, but I always seem to catch a glimpse of their white tails bobbing up and down as they run off through the bushes. All signs that fall is here and I feel ready to let go of summer and embrace the season ahead. Although, I must admit, I am already looking forward to many more matching Hawaiian shirt shots next summer! 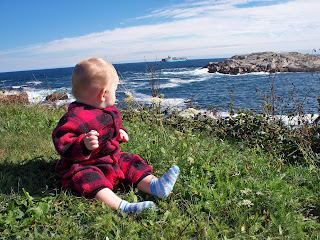 Watching a boat go by on a sunny day
Posted by Ashley at 2:31 PM 1 comment:

Tricks and talents of an 8 month old

Having a laugh with his toy car
Cale's personality is really starting to shine. He is a hurricane for sure - strong, physical, determined - but also incredibly happy, social and curious. A friendly, inquisitive yet powerful hurricane, you might say! He is extremely close to a full on crawl (his record is 7 hands forward in a row) but is still in what we call the sweeping stage, where he pulls himself on his belly across our floors collecting any dust particles in his path. If only he had a sponge suit, he could do our mopping as well! He still smiles at everyone he meets and occasionally will see someone across the room and stare at them for as long as it takes to make eye contact and get a smile in return. Most people seem to love this, but once in awhile in a restaurant he will twist completely around to give someone the stare down but the person averts his eyes and won't return his glance. At this point we need to distract him so the staring contest doesn't continue for an uncomfortably long time! He has 7 1/2 teeth and is making more sounds and eating more foods everyday. He loves to pull himself up into the standing position and laughs when you help him walk across the room. He loves cars and balls but doesn't seem too interested in stuffed animals. When he is on the move there is clearly an object he is determined to get to and everything else is simply an obstacle in his path. He seems particularly interested in cords, outlets, the dog's dishes and houseplants at the moment, so we are in the process of rearranging each room to make them 'hurricane proof'. 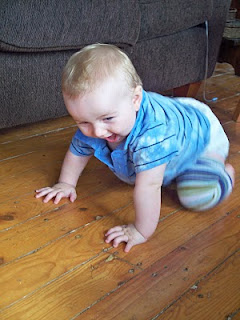 Baby on the loose!
Posted by Ashley at 12:45 PM No comments: