I'm hitting the road for a conference in Halifax today, so yesterday was our day to celebrate Father's Day. Cale and I made a menu of fun activities for dad to choose from and despite the weather calling for rain, the day was clear enough for us to cross off most things on our list. Geocaching, go-kart racing, market, brownie baking, family movie on the pull out couch and still lots of time leftover to play with the girls on the farm. It's still hard to believe that this time next year Alan will be a father of two!! 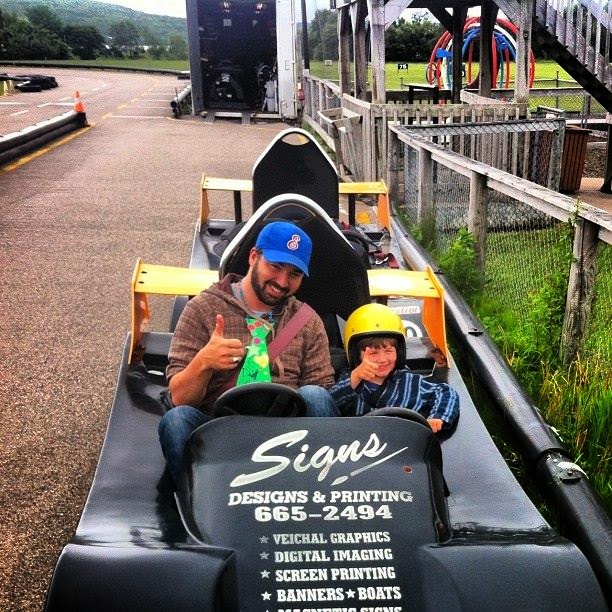 I have to tell the story of how we ended up go-kart racing this weekend. On the first Friday of each month, Annapolis Royal celebrates with 'First Friday' an evening where there the shops stay open later and there is free entertainment around town. My parents were here last week, so even though it was raining, we stopped by to check out the fun. My neighbour, Dan, owns a photography studio in town and he pointed out two contests that were going on that night- the local newspaper had a 'match the photo game' where you had to find photos in the paper that were taken in local shops. Write down where each photo was taken and you win a prize. The second contest was a name draw for a beautiful print from Dan's shop. So mom and I put our names in the draw then set off finding the photos in different stores. And sure enough at the end of the evening I had won, not one but both contests!! It was quite hilarious. I don't think anyone else completed the newspaper contest and only 2 people had their names in for the photo, so my chances were pretty good - but it was a great small town moment none the less! And the prize from the newspaper included a bunch of gift certificates for things around town including a free go-kart race at Action Jax!
Posted by Ashley at 10:46 AM No comments:

Our year of transition has begun. We have moved into our new home - a beautiful farmhouse in Moschelle, only 3 km outside of Annapolis Royal. We are renting one side of the house owned by a young family with 3 little girls aged 6 and under. Cale is in heaven. Chickens, cows, dogs, a cat and a pony PLUS a trampoline, tree swing, playhouse and tons of space to run. In our first 24 hours, Cale has stopped wearing shoes, climbed his first tree, learned to check for ticks and held a newborn chick! He refers to the mom and dad next door as 'the farmers' and loves playing with his new best buddies. I think we have a great summer to look forward to.

We also received some positive news about our baby during our latest visit to the IWK's Fetal Assessment Clinic. The echogenic bowel (which appears as bright white in an ultrasound) has faded to the point where the specialists would no longer say the soft marker is present. It was such an enormous and unexpected and relief to hear some reassuring results. I definitely cried a few tears of happiness. It felt so good to know that things will very likely be ok with our little boy.