I've taken a ton of great photos over the past couple of weeks that I can't wait to share. As March approaches, we are about to transition into a new routine. Odin will be 18 months tomorrow, so he can finally start attending the daycare in Annapolis Royal. His current home-care situation turned out to be great, but having him in town will make my commute time, and life in general, so much easier. This is also where Caleb goes after school and he can't wait to get off the bus and have his little brother waiting for him. I'm sure Odie will be overjoyed when 'Caco' walks in the door!

I'm also finally feeling settled in this little town. Over the past few months I've been able to make some good friends, which isn't easy these days! But I'm beginning to build a great network of moms that I really enjoying spending time with. One of our good friends lives on a farm (where we lived the summer before Odin was born), and I'm learning how wonderful it is to have access to all the joys of farm life, without having to do all of the work! This week we were very excited to visit some chicks that had just hatched from their incubator. Odin, being the little animal lover that he is, couldn't get enough of them...and the cats, giant dog, chickens and horse. Great times, and great photo ops, ensued!

Hanging with the chicks: 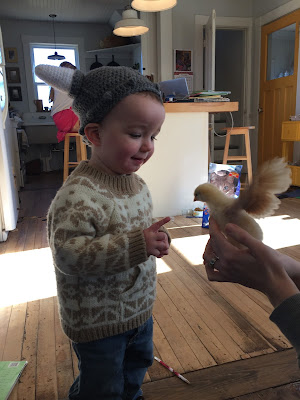 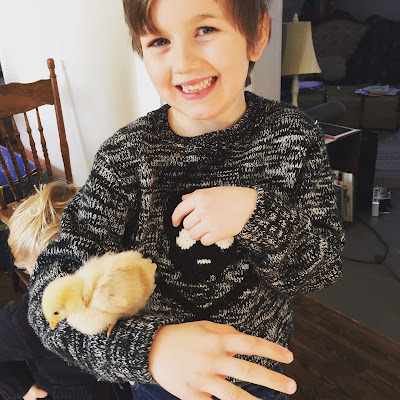 Our little one is growing up FAST! He has developed a new awareness of the world and he wants to be right in the middle of everything. He is discovering the joys of independence, which makes our life easier (and more hilarious) in many ways, but also has some challenges.

The word 'no' has become a staple as he learns that he has control over his own mind and body. He first began asserting this new-found power at meal time, as he basically refused to eat anything we were serving for a few days - just because he could. He would push food items away or casually drop them on the floor. We won this battle by basically ignoring him for one meal and not offering him any food at all. The feeling of being excluded was enough for him to start asking for food almost immediately and now he is back to being a voracious eater at mealtimes!

He is also very quick on his feet these days and I often get that 'pit in my stomach feeling' when I've lost sight of him for a few minutes and hear only silence. Most of the time, I find him deeply engaged in playing with a toy, but sometimes I'll find him climbing up on the back of the couch, or he'll be causing trouble in his favourite room in the house - yes, this would be the bathroom! Sometimes he is innocently brushing his hair, but more often than not, I'll hear a familiar flushing sound and know exactly where to find him. Thankfully, he is pretty good about not flushing our items down the toilet, but he sure gets a kick out of watching the water swirl into the abyss!  Here are a few of his other new skills:
Posted by Ashley at 10:52 AM No comments:

Talk of the Town

We officially have a 6 year old, and we spent the entire week celebrating how happy we are to have him in our lives. And it was a big, big week beginning on the Saturday before Cale's actual birthday. Our little town is one of many across Canada who have stepped up and formed a local committee to assist with the relocation of Syrian refugees. The town has been raising money, collecting donations and even renovated a beautiful old home and filled it with furniture and firewood in anticipation our new family's arrival. There has been a lot of discussion about refugees in our household because the house that has been purchased for the refugee family is directly across the street from us. This means, sometime in the coming weeks, we will be welcoming new neighbours who (hopefully) have a couple of children for my boys to play with.

Caleb, being the incredibly empathetic and generous little fella that he is, was quite concerned when he heard about why the family needed to leave their home country and how they would be arriving here with very little. He thought it was exciting that a local group had come together to help them settle into a new life in Canada, and he wanted to help out to. So the idea of a fundraiser was born - and after recruiting a couple of his friends, we held a 'Hot Chocolate and Cookie Cale' at the new outdoor skating rink in Annapolis Royal. Caleb personally began collecting money around our house (we have no more loose change anywhere!) and donated money he received as Christmas gifts and even the toonie left to him by the tooth fairy.

Caleb and his friends, the Froese sisters, were hoping to make 10 or 20$ from the sale, but after spreading the word around town, people came out in droves to support the cause. People donated cookies to sell, the local coffee roaster turned up with pots of coffee to share and even the fire department was out working late the previous night to flood the rink and make sure it was ready for the big event. I was utterly blow away by the support. The kids ended up making $769 in 2 hours, and the local paper was there to report on the event. The article captures the spirit of the day, and Caleb was delighted to be interviewed. His week continued to get better as his teacher read the article to his class and people commented to him that he was the 'talk of the town'! It was wonderful to feel we did a little something to contribute to this nation-wide effort, but the real work will begin once the family arrives and we are given the opportunity to be the best neighbours we can be in order to help the family settle into their new life in our community.

And unbelievably, the birthday week fun was only beginning. On Caleb's request, we decided to head to Fredericton to celebrate with  friends, family and most importantly COUSINS!! We spent 4 days and nights playing outside, watching Aly and Ava play basketball, seeing the new Star Wars in the theatre (!!) and squeezing in as much fun as we could. Here are some photos and our annual birthday interview! 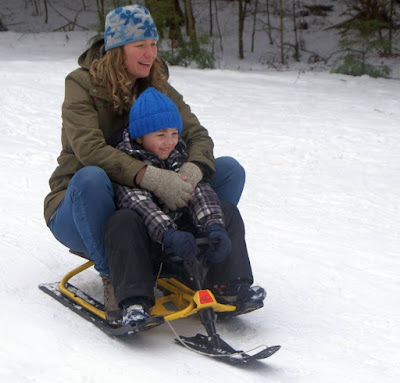