What's in a name?


Naming a baby is tough. I've had some girl names in mind for years, but coming up with boy names seems to be particularly difficult for Alan and I both. Girl names I love include family names like Ellie and Pearl and my personal favourite Magnolia (Nola) which Alan wasn't sold on, but I was willing to fight for! But coming up with another boy name was a difficult task for us. In the end we had two names that we both liked - Evan August and Odin August. Since Odin was born on Sept 1, we had to scratch the August middle name! After an intense delivery experience where our baby was born very quickly in the midst of what seemed to me like a mad flurry of activity around us, we took a look at our new son and settled on our name - Odin Alistair.

I discovered the name Odin a few months before he was born. I loved the sound of it - a lot like Aiden, Owen or Otis - but more unique. The meaning of the name is 'frenzy, inspiration', which is how I felt after the madness of childbirth! However, there is a long and well documented history to the name. Odin is the name of the supreme Norse god of art, culture, wisdom and law. The name supposedly projects strength and power. My father likes to say that Odin is the Norse god of fly-fishing and flat-picking! Apparently, J.R.R. Tolkien's Gandalf was loosely based on Odin, and they both are depicted as old, wise men with long flowing white beards. I wasn't sure if we could pull off such a strong name (Odin is the father of Thor, after all!), but now that we've chosen it, I really love it and couldn't imagine little Odie being called anything else. I hope he grows up to really like it as well.

In other news, Caleb continues to win awards for being the best big brother of all time! He is so in love with Odie, it is truly amazing. He finds him fascinating and fun, which is pretty great considering he is not able to interact with him too much yet! I told Cale that some day Odin will be so much fun for him to play with and Caleb responded immediately, 'But mom, he is 100% fun right now!!'. Cale also loves getting his photo taken with the baby, especially if he has managed to get a smile from his little brother. I often hear - 'Mom, come quick and bring the camera!'. My favourite quote from Caleb so far was after taking Odin to a concert, where much to my surprise, he was a perfect little baby. No tears, no feeding, completely happy to be swept away by strangers and dance in their arms...I was waiting for the crisis moment to hit when he would burst into tears, but the moment just didn't come. When we got home Cale walked right up to his brother and said 'Odin, I'm more prouder of you than I've ever been in my life. You were just soooo good tonight'. My heart nearly exploded!

It's hard to believe that Odin's precious days of being a newborn are coming to an end. His '4th trimester' is almost over and he has become a full fledged smiling, responsive and happy little baby.
Having a newborn is an incredible time - yes, it is also exhausting, challenging and filled with tears, but spending every minute of your day with someone who has just entered this world is absolutely fascinating. It is a magical stage that goes by so quickly, and as this is very likely our last baby, I am feeling quite sad to see the newborn days come to a close. 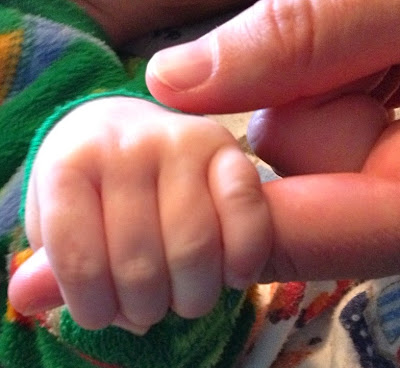 Here are some of the things I love most about newborn babies:

And now for a little 'Welcome to the World' video featuring some clips of Odin as a newborn.

I've been waiting to write this blog post for a long time. Our little Odin is now 2 months old, the exact age that Caleb was when I started writing the blog 4 and a half long years ago. I can now go back over old posts, compare old pictures and re-read old thoughts, challenges and milestones. Here is my first photo comparison, one that I've been dreaming of for weeks - the two month party shirt photo! I love that Odin looks so much like his big brother. When he was first born it amazed me to be staring at such a familiar face, and he keeps looking more and more like Cale each day.

At 2 months, Odin (or Odie as we've been calling him) has finally had his 'hello moment'. It's like he's woken up and begun to realize he is part of a world filled colours, sights, sounds, smells, and people who love him. For the first several weeks I felt like he had only 2 emotions - negative (unhappy, cold, wet, tired) which would be very clearly expressed by tears, quivering bottom lip, frowns and whimpers, and neutral, which would be expressed with a straight-faced stare. Now he has developed the highly anticipated third emotion - positive! I wouldn't go as far to say that he is actually expressing happiness - but he can now stare directly at your face and SMILE, grin and coo in a delightful way. It's the best, especially when it is directed at his big brother who absolutely adores Odin and basks in the reward of a smile.

And now for a Halloween picture. Odin was wrapped up in dad's arms fast asleep while we were trick or treating but Caleb was really into it. Dressed as Darth Vader, he hit the streets knowing he could scare anyone (except, in Cale's words 'people who are fearless'). He was happy to pose for some actions shots for me and asked, very sincerely, if I could tell that he was smiling under his mask. Too cute.