Scenes from our new home 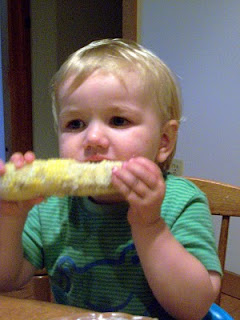 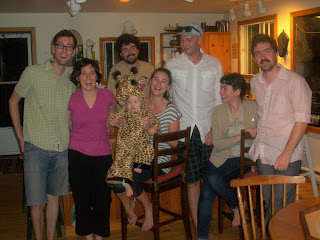 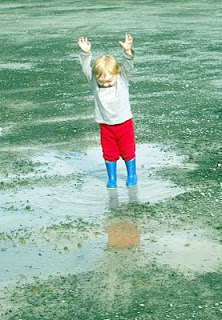 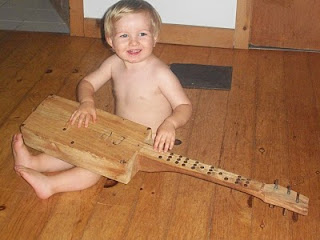 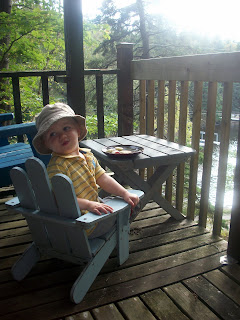 After school snack on the patio (or 'relaxin' as Caleb says) 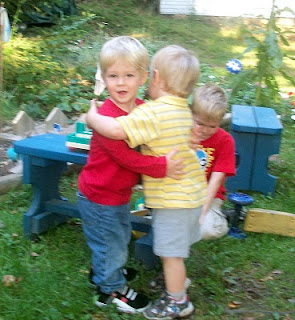 New friends
Posted by Ashley at 8:56 AM No comments: 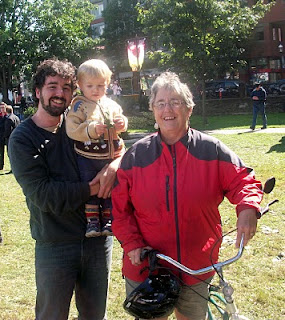 Checking out some tunes with Teresa and Dad
Thanks to the Jeffries/MacEachern team, all three of us had a wonderful Harvest Jazz and Blues weekend this year. Caleb was able to enjoy some of the afternoon shows and in the evenings he was well taken care of at the Jeffries' house, spending time with Aunt Teresa, Uncle Tommy and family friend Sue. I was a bit worried about how Cale would go to sleep, but I knew that after raising 5 kids, Grammie Jeffries would be able to handle any situation. Grammie tried to put Caleb down at 8:30, but after 45 minutes of talking and singing with no signs of falling to sleep, she let him come back down to join in on the family fun. Everyone was sitting in the kitchen chatting, and not wanting to miss out, Caleb grabbed his booster seat, dragged it into the circle, sat down, crossed his arms and legs and started gabbing right along with everyone! I wish I was there to see it, but Alan and I were out on the town enjoying Taj Mahal at the Playhouse. So much great music, family time, friend time and Alan time...can't wait to do it all again next year. 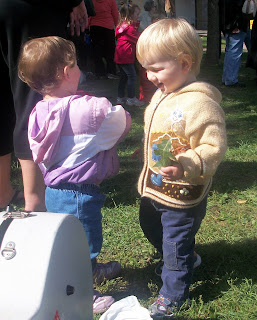 Having a dance with Cousin Monica at Officer's Square.
Posted by Ashley at 7:59 PM No comments: 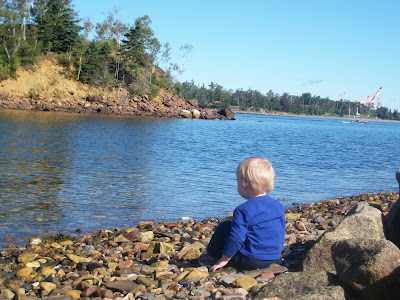 New rock throwing grounds
The switch to our new house has gone very well in all aspects except for one...our dreaded sleep issues have returned. After being spoiled by several weeks of Caleb going to bed easily and sleeping through the night, we were once again faced with bedtime woes. The first few nights, Caleb woudl cry once we entered his room, tensing up with the anticipation of the bedtime routine. He didn't want to read books and he wanted to be put down in his crib even less. For 3 nights we sat with him for 3 hours, alternating shifts of patting and singing and trying not to loose patience as the exhaustion set in. Now that we have neighbours, I'm extremely conscious of Caleb crying for fear of keeping others up or worse yet, having someone think we are somehow torturing our child each night. So instead of opting to let him cry for 15 minutes, we stayed by his bedside desperately willing him to fall asleep. I was really feeling like Caleb's sleep issues were my biggest parenting failure. How did I ever let it get to this? I tried to consol myself by thinking that he had not only just moved into a new house, but also started daycare full time and switched to the toddler room - many changes for a young boy to take in all at once, but still I was feeling quite down about my parenting skills.

The next 3 nights Alan was away, so I had to face the battle on my own. I decided to take a new approach and try to make him feel safe and happy in his new room. I shamelessly enticed him into his room before bed by saying in an overly enthusiastic voice 'Let's have some chocolate in Caleb's new room!!'. He fell for it. We were in the room without tears. He then agreed, without much hesitation, to let me read a couple of new Dr. Seuss books I had picked up from Value Village earlier that day. Finally I asked if he was ready for bed. He said yes, followed by 'pat you' (since I often ask 'do you want me to pat you?' at bed time). So I patted away and quietly sang and magically, he fell asleep - after only about half an hour. A long time, yes, but a huge improvement from the previous nights 1.5 hours. The next night, it was the same (minus the chocolate bribery) and with no patting involved. After only 15 minutes, he was asleep and I only had to hold his hand through the crib slats. This seemed like a better option until I had to very, very slowly release each of my fingers from his grasp and then tiptoe ever so quietly out of the room so as not to wake him. Once I was out, I breathed a huge sigh of relief. Last night was even better. Great time reading books, happily laid down and was asleep within minutes.
I think we are getting back on top of our sleeping dilemma...at least until we head home for Harvest this weekend...but I have 4 solid nights of sleep ahead of me before then AND I'm planning on pawning him off on the in-laws for a night or two while we're home!! If our sleep troubles reappear when we get home, I know we can get through it, as we always do, with patience, love and an emergency chocolate stash. 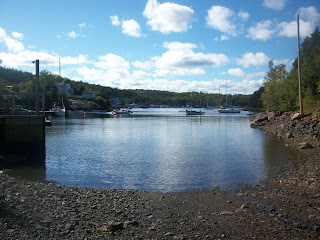 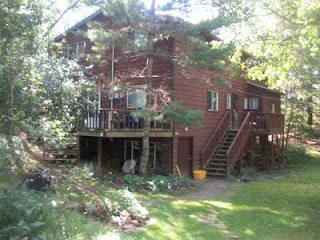 I'm sneaking in a quick blog post while I have internet access at work. We are quickly settling in to our new place and should be back online next week. Caleb loooves our new space. He wakes up in the morning saying 'new house' and goes to sleep saying 'Elwynn' (his new 22 month old upstairs neighbour). He is especially excited about the blue jays that have started arriving at our feeder, his sand box and the fact that he can access the food in our open cupboards. Alan and I are less excited about the latter, but we are really enjoying the new space as well. More updates to come next week. 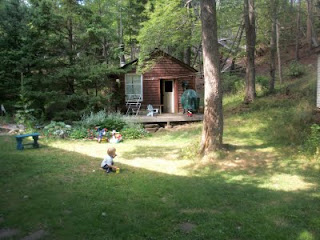 Playhouse for the kids 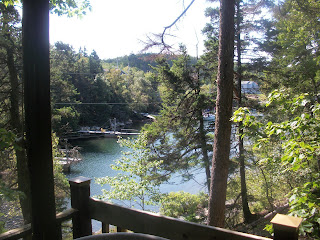 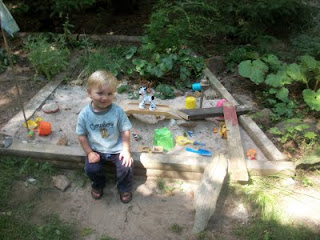