Three year old in the house! 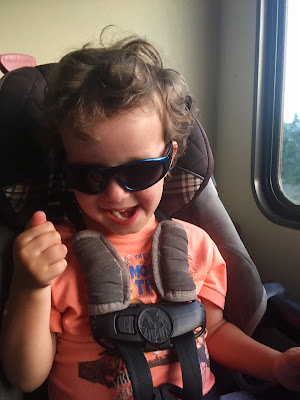 It's time for my annual birthday post - all about our hilarious, incredibly determined, mischievous, cuddly, imaginative and sweet little Odin Alistair. Life with this little fella certainly keeps us on our toes. He works to assert his views at all times, always challenging us on even the seemingly most mundane things - Cereal for breakfast? Sure, but not in a bowl, in a cup and not that cup, the tall glass one. Sure, I'd like some pasta,  but with nothing on it....that type of thing. All the time. But he is also incredibly funny and has added a new level of fun and joy to our household.

Odin is sleeping through the night (90% of the time), able to independently do most things, he loves books, anything with wheels and gently patting our cat, Coral. He loves being tickled, and in fact insists on being tickled and "kissed all over" often. He likes to pretend he is a baby (with no teeth) and is happiest running in the backyard, hiking in the woods, camping in Sunny or playing with his cousins. Potty training is another matter - not much progress to speak of on that front, but I'm sure it will come. Later, as Odin often tells us.

He has three imaginary friends, all conveniently named Joe. Two are twins and we aren't too sure about the other, but he is old enough to be in "big boy school". They have "Christmas tree hair", which is apparently means it stands straight up, we think like an 80's Trolls doll. The Joe's pop up from time to time to cuddle him at night or join us for a meal. As my uncle Jay said, it's all quite imaginative, except for the names!! 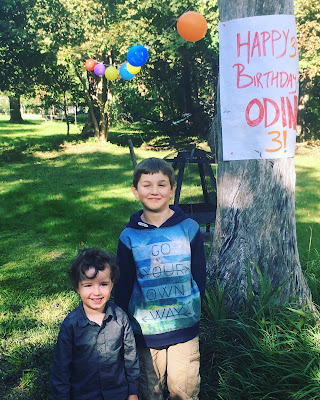 We invited friends over for a nice backyard birthday bash complete with a pinata and a game of pass the parcel. We ended up with 22 kids, although I had expected up to 30! Thankfully the weather was nice enough for us to keep everything outside and the party wrapped up by 7:30.

Here a few of my favourite recent Odin quotes:

When trying to put him down for a nap, he decided he needed some pants to sleep in, not just his diaper. I grabbed the nearest pants and when he looked down to see what I'd put on him he protested "No mom, not those pants, they don't rhyme!" (Ie, they didn't match with the top he was wearing, haha)

He's decided lately that he won't eat the crust of sandwiches, which he might have picked up at daycare, but I was very surprised when he finished a pb+j and didn't touch the crust explaining that he "doesn't like those peels!"

When asked by my mom what time he woke up after a night at Greggy's new fishing camp he said, "First thing o'clock!"

And I'm so happy to share a new video interview of Odin on his big day. You'll see his little personality shine through as he quickly tries to take over the interview by asking Caleb questions. Happy birhtday, little man!!