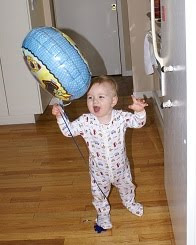 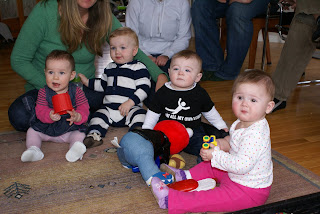 Eloise, Cale, Sam and Monica partying it up!
Posted by Ashley at 4:13 PM 1 comment: 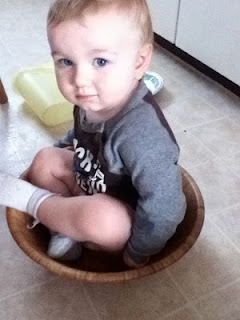 In his old age, Cale has developed an interest in cooking!
...until Caleb is officially a ONE year old! And what a year it has been. It seems like a lifetime ago when I was still pregnant and feeling sore, tired, nervous but mostly excited to finally meet this little person who had spent 9 months growing inside of me. We didn't know the baby's sex, hadn't decided on a name, and really had no idea what we were in for. Times have certainly changed! It's crazy how much Alan and I have learned this year, so many brand new words in our vocabulary like swaddling, expressing, sleep training...but it is truly amazing how much our little guy has learned. I remember people telling me how incredible the first year is, but you can't fully appreciate the magnitude of the changes until you've gone through it day by day... the first smile, first laugh, first bath in the big tub, first roll over, first tooth, first food, first crawl, first clap, first words, first steps, first time sitting in a salad bowl....what a truly wonderful experience it has been!

On the home front, Cale is finally over his bug. He found comfort during his sick days in a surprising new friend - our broom! He honestly didn't want to let it go for 2 days straight...it was like watching a tiny dog trying to run around with a huge stick. And although Cale is feeling better, Alan has been super sick over the past couple of days...and the broom doesn't seem to be helping. Hopefully, he is through the worst of it and will be back in top form for the weekend. We've got birthday parties and bluegrass brunches to look forward to. Can't wait to be home and celebrate with family and friends. 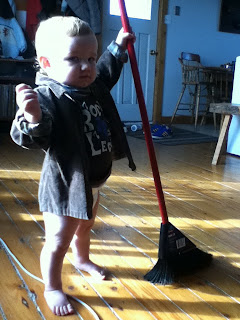 Caleb's 'don't think about taking this broom away from me' look 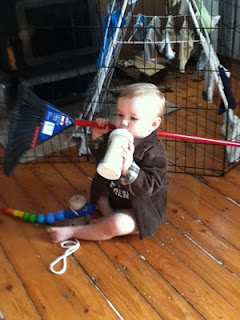 Sharing a drink with an old friend
Posted by Ashley at 10:40 PM 1 comment: 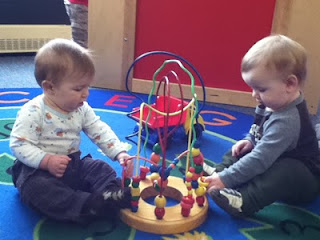 Pre-illness Cale playing with Gus at the Spryfield library

Cale almost made it entirely through his first year without getting sick, minus a couple of minor colds, but that all changed yesterday. He was struck down with his first ever stomach bug. The poor little guy had no appetite all day, had diarrhea and when I tried to put him to bed had his first ever vomit...all over mama. It was much more scary for me than gross, which must mean that I am truly embracing motherhood.

I instantly hit the internet to find out what could be going on. His symptoms pointed to the flu, although he had no fever and was still in a surprisingly good mood. I decided to play it safe and call 811, the Nova Scotia telecare line that has nurses available 24 hours a day to assess illnesses. I had to wait an hour for them to return my call, during which time Cale fell asleep without any further issues. The nurse was great and reassured me that his symptoms were relatively minor and with lots of fluid and sleep he should be feeling better in a couple of days. I know there will be many more scares in the future, but I feel like the first is probably the worst. It's funny how we always say how big Caleb is, but when he gets sick he seems so incredibly small. On the up side, he has been full of hugs and cuddles for us today which is really nice. Thankfully he is healthy and strong and has been feeling much better today, so I think we are through the worst of it. 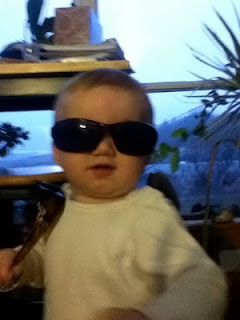 Too cool for a stomach bug? Apparently not.
Posted by Ashley at 12:25 PM No comments:

I haven't been posting much lately, so I thought I'd share these great shots that Lydia took over the weekend. Thanks for the great Christmas t-shirt Mary and Jen. Enjoy! 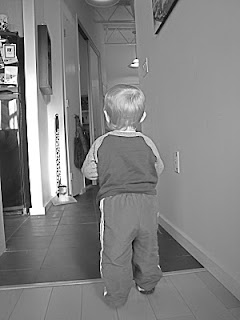 I'm ready to go for a little stroll... 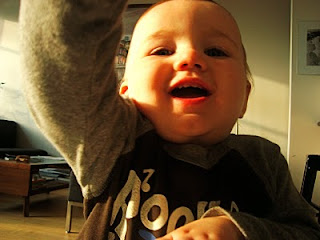 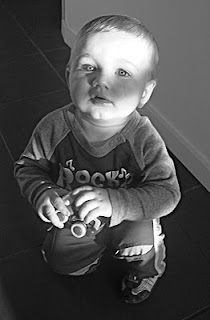 ...or just sit here and be adorable.
Posted by Ashley at 3:44 PM No comments:

Winter weekends with the family

We are practicing many new skills around here, like drinking and using a spoon on his own as well as learning some signs. This means there is a lot of encouragement and celebration of life's little accomplishments going on around here. 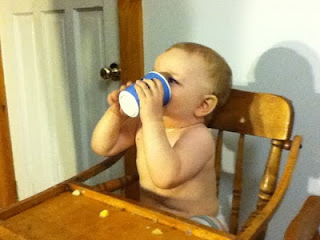 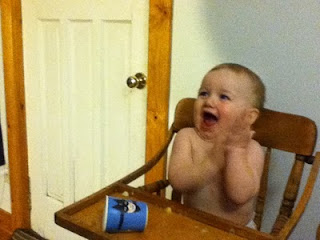 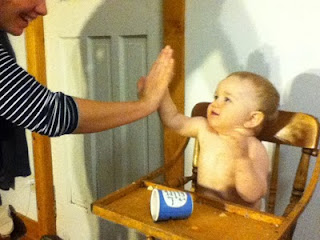 Post drink high-five
Yesterday was a beautiful winter day - the perfect day for an afternoon date! Lydia offered to watch Cale for a couple of hours while Alan and I hit the town to celebrate my birthday. We planned on skating at the new outdoor Halifax Oval in the Commons, but it was closed to the public for the day due to a speedskating meet so we went out to eat instead. Lydia and Cale had a great afternoon of playing nonstop.

This was our second birthday celebration of the weekend. My friend Tara invited us to a birthday brunch on Saturday, where Cale had a blast playing with and learning new tricks from some older babies who were at the party. He interacted really well with the other kids, minus one tackle that he couldn't resist giving another baby! He also managed to sneak in his first chocolate cupcake. I have been waiting until his first birthday to let him have his first sugary treat, but he found a big chunk of one on the floor which I noticed when he smiled up at me with chocolate crumbs all over his face! It was also so nice for me to have other parents to talk to. I realized that the reason why Cale hasn't been feeling well the past few days (diarrhea and frequent wakings) is probably due to the four molars coming through right now. The joys of teething. 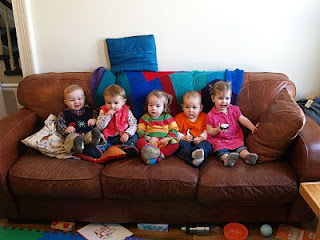 Making new friends
On a sad note, we had to return our good friend Arlo to the shelter this week. Arlo has been a great pet to us over the past 2 years, but he has never been comfortable around kids and he was getting increasingly nervous around Caleb and showing signs of aggression. The decision to look for a new home for him was not an easy one, but I know he will find a new family that will love him as much as we did. It will take awhile to adjust for us to life without him. Miss ya lots, little buddy.
Posted by Ashley at 12:54 PM 1 comment: 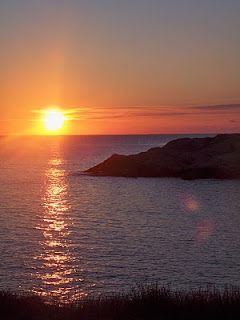 Cale is waking up earlier these days, which means I once again get to see beautiful sun rises over the water.
Our camera is broken and our Flip was stolen a few months ago, which is why the blogging has slowed a bit. Other than that, things have been going really well. I'm back to work, which hasn't been nearly as bad as I thought it was going to be. I think it would be much, much different if I had jumped back into working full time and Caleb had to start at a daycare, but with my part time hours and Alan able to watch Caleb when I'm at the office...things are feeling really good. I'm still not sure what the future will hold for me career-wise, but at least for the next few months things are looking great.

On the home front, Cale is getting closer to walking everyday. He has taken up to 10 steps a few different times, but is still more comfortable with the crawl. We aren't rushing him either. He is fast enough on the floor, I can hardly imagine him running! His other new trick is giving high fives, which we are definitely encouraging!

We are 7 nights into our new sleep routine. Our co-sleeping days are officially over. He is still waking 2-3 times during the night, but a little back rub quickly puts him back to sleep. We haven't resorted to the cry it out method, and it looks like we may not need to. I feel like with a bit more time, he'll finally be sleeping for 12 hour stretches. Alan usually takes the night shift and I take over when he wakes up, which has been between 5:30 and 6:00. This is taking a bit of getting used to since he used to sleep in until 8:30 when he was sleeping with us, but I guess those days are gone. Once we get his sleeping sorted out it will be time to think about weaning which will bring a whole new set of challenges but will bring him even closer to independence. Our little guy is certainly growing up!

Here is a photo of Cale with his new friend, who we are calling Teddy. We've been waiting for him to form an attachment to either a blanket or a teddy bear and it looks like he may have finally chosen a special friend. Unfortunately, it is about 10 times larger than any other stuffed animal he has, but it is really sweet to see him cuddle up with his bear. He still isn't much of a cuddler with us, but I now know he has it in him and I'm sure the hugs will start coming our way soon. 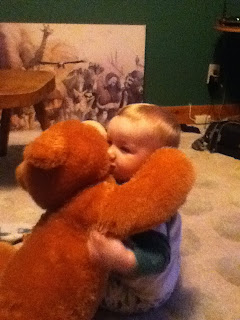 Posted by Ashley at 7:46 PM No comments: 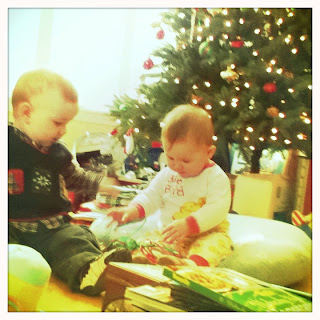 Christmas #2 with cousin Monica
A new year has arrived and I find I'm feeling a bit nostalgic about saying goodbye to 2010 since it was such an incredible year. I've learned and loved more than I thought was possible this past year and 2010 will always be in my mind, the year of the baby. Hopefully 2011 will be the year of the baby who sleeps!

Today is my last day of maternity leave. How did that ever happen? Part of me feels ready to re-enter the real world, but part of me wants my life and little family to stay just like this forever! Luckily I will only be working on a really exciting contract part time for the next few months, which means I only need to be at the office 1.5 days a week which is a great way to transition into life as a working mom. Alan is able to look after Cale on the days when I'm working, so we are also very lucky not to need child care immediately.

Caleb is incredibly fun to be around right now. He is learning so much - mimicking speech, saying a few words (mama, dada, uh-oh and a big favorite is hat which means both hat and light and maybe a few other things) and he finally learned to clap! According to my What to Expect the First Year book, clapping should have happened a few months ago, so we've really been trying to encourage him (not that I compare him to the book often, but it was still a skill I wanted him to master). Finally over Christmas he decided it was time and he's been clapping non stop ever since! He has also taken his first steps!! Not a full on walk yet, but definite steps to get between people. I'm so glad that Alan and I can continue to enjoy these changes and milestones for a few more months.

Since I'll be returning to work, the time has come to really get serious about Caleb's sleeping habits. Of course, we completely regressed back into co-sleeping all the time over the holidays, but now it is back to the crib and no more night feedings. Last night went better than I would have thought, so here's to hoping that by Cale's first birthday he'll be sleeping consistently through the night. I'll write another sleep update in a few days to let you know how things are progressing. 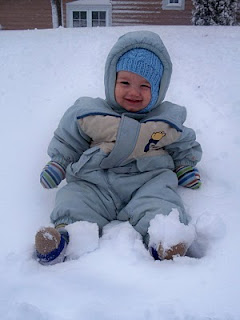 Happy New Year everyone!
Posted by Ashley at 2:09 PM No comments: