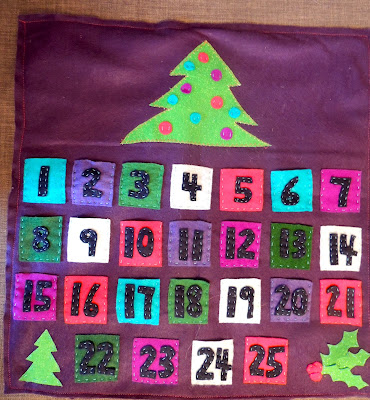 A friend of mine on facebook posted this idea last week and I've been working away on my own activity advent calendar ever since. I had pictured creating something simple - paper notes clipped to a string with clothespins. However, I decided to act on the crafty urges that usually hit me around Christmas time, and before I knew it I had embarked on my most ambitious hand-stitched craft ever!

I really wanted to make a calendar that was focused more on giving than receiving, so here are the 25 things I came up with.


I love that moment as a parent when you suddenly realize your 'baby' is capable of doing something you had no idea they could do. Like the first time Cale did a summersault in front of me, or when he burst out singing the entire alphabet when I was just getting ready to tell him about the first 3 letters! I definitely give credit to his daycares for secretly building his skills, but I think it is probably true that your first child can do a lot more than parents realize.


Our most recent discovery - board games!! Alan and I both love board games, but for some reason, I didn't think Cale would be able to partake for another year or so, until my aunt Colleen gave Caleb a great activity book recently that featured a Halloween version of 'Chutes and Ladders' called 'Broomsticks and Slime'. Cale wanted to try it, and sure enough, board games had suddenly become part of our family fun.

I wanted to find other age appropriate games, so I purchased Candy Land for $9.00, and - voila! we had 2 games in our repertoire! We were telling my parents about this on skype, when my dad gave the best suggestion yet - why don't you guys make your own board game? This was an absolutely perfect activity for a wet Saturday at home and after an hour - Caleb's Pirate Island was born. He made the initial path lines, I filled in the squares and together we came up with the rules. As this was a pirate game, we included things like:

It is actually quite fun..and it has been interesting to see a bit of a competitive side come out in Cale! But he is learning that the most important part is to have fun and last night he told me: "Mom, I won the game and you didn't win, but that's ok, you did a good job anyway."