We've had a busy last few weeks and it's been absolutely splendid! My parents came to visit with Aly and Ava for a few days before taking Caleb back to Fredericton to spend his March Break. This was a big trip for him, and he was very, very excited and had a wonderful time on his own. Alan's folks then brought Caleb back over on the ferry at the end of the week, and Caleb's cousin Tanya came along for the adventure. So we have had a ton of family time and we all loved it, especially Odie! He woke up each morning wondering who would be downstairs for him to play with. He certainly missed Caleb on the days he was gone, but I really enjoyed having some alone time with my 'baby'. And now it we are resting up after all the fun and relaxing close to home over the Easter long weekend. Alan will even be home to join us tomorrow and we can finally all spend a day off together on Monday. Let's hear it for family time!

"Bruiser"...that was how our doctor referred to Odin during his 18 month check up yesterday! At 27 lbs, he is still in the 98th percentile for height and head size, so the doctor is predicting that we'll have a big boy on our hands.

Our little bruiser is doing wonderfully well at his new daycare. It is hard for me to believe that he can sit still during circle time, wait in line to wash his hands, sit on his own chair and eat his meals using utensils and nothing but regular cup. Each day we seem to move further and further from having a little baby in our life.

He's also developed into quite a little talker. The doctor said at this age he should have about 20 words, even if they are not perfectly pronounced. Odie has a ton of words, some of them very clear and some of them only a parent's loving ear could possibly understand! Nore means more, height means light, Caleb is still lovingly referred to as Caco, a horse is an indescribable sound that comes from deep in his throat and cheese is a similar sounding grunt. He is very consistent with these terms, so we seem to have no trouble understanding his needs (which do often seem to revolve around cheese!). I've posted a new video below showing off his newly expanded vocabulary. He still doesn't like to use the 'L' sound much, so we have been trying to over-emphasize it when talking to my parents on skype and saying the word 'Linda'. This has resulted in a new name for his grandmother - Lalala. Just watch and see!

We are also experiencing the other 'joys' of toddlerhood - he loves to drop items just to see what sound they make and he will scream if something happens that he doesn't like (his sense of volume control has not yet been fine-tuned!).  A great example of this is when he opened the cupboard doors a few days ago, grabbed a bag of sunflower seeds and proceeded to dump the entire contents onto the floor. After being mesmerized by just how far the mess had spread, he looked up at me innocently and said 'Uh oh.' (Caleb likes to remind him that 'uh oh' doesn't count if you did something on purpose). I quickly grabbed the broom and dustpan to begin cleaning up the mess, when Odin decided that actually, HE was going to be the one to clean it up. He grabbed the broom in one hand, the dustpan in the other, and proceeded to push the majority of the seeds under the stove and into other irretrievable places. I was at the end of my patience at this point, and took the broom back to just get the mess cleaned up, already. Well. Odin was dismayed and heartbroken. He burst into tears, became red in the face, and let out a terrible scream at the injustice I had just put upon him. After several deep breathes (on both of our behaves) we managed to get the floor cleaned up and everyone calmed down. I don't think Caleb ever really threw temper tantrums, but I have a funny feeling we may begin to experience some meltdowns with #2!

Later that night, Caleb had an adorable quote that I need to share. He said, 'Mom, isn't it funny how things can be both big and small. Like how Odin is so small but he takes up such a big space in our hearts'.  So true.

I also wanted to share a couple of photos of some crafts Cale and I have been working on. These were inspired by a book given to Caleb on his birthday from John and Colleen. We love it!! 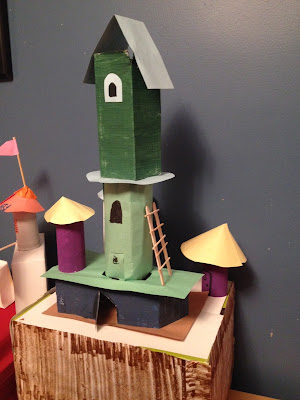 And enjoy the new video!!