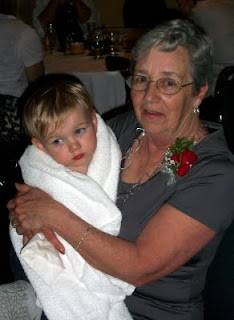 Sick little guy being comforted by Grammie at our family brunch
I had been warned by several people that once your child starts daycare they are constantly sick. I didn't really believe them, but now I know that it's no myth. Caleb is finally recovering after a week-long illness. He has been vomiting since being sent home from daycare last Thursday, unable to keep any food down. A few nights he woke up at 3 am asking for 'crackers' 'cheese' and 'pastas' but as soon as the food entered his mouth he would be sick. I am sure I set a new mommy record for both the number of times being directly puked on AND the most laundry loads done in a 48 hour period. I honestly got to a point where it didn't even make me blink. The most concerning thing about this particular bought of illness is that he seemed to be in a lot of pain when he peed. Not good at all. After two trips to the doctor's office we were told to collect a pee sample. This is much easier said than done. While I was at a conference, Alan spent 5 hours chasing a bare-bummed little boy around the house with a tiny bottle! He had no success until after 5 pm when it was too late to take the sample to the IWK lab. So this morning, my parents who are here visiting, were chasing a bare-bummed little boy around the house hoping to collect the precious sample! Finally Alan stuck him in a warm bath and we had our sample in less than 30 seconds!! Thankfully the results were clear, so it must have been just a bad flu virus. Now he is down to just a runny nose which I can handle and he seems good enough to return to daycare tomorrow. 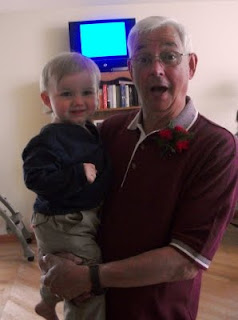 Starting to come around with Grampie

We were really hoping that he would be in top shape this weekend because we were in Fredericton for John and Maureen's 40th wedding anniversary and the entire family was in town to celebrate. Several of Alan's family hadn't seen Caleb since last summer, so we wanted everyone to see his great personality, but alas, everyone met a sick little man instead. He did try to be in good spirits, and glimpses of his happy self did pop through at times, although he did throw up on a second cousin at our family brunch. It was the first time that all 4 of the Jeffries cousins were together and Caleb enjoyed their company as much as he could. He also managed to get in a few nice hugs and kisses to his many aunts and uncles. I just hope that we left only good memories behind, and not a trail of sick family members! 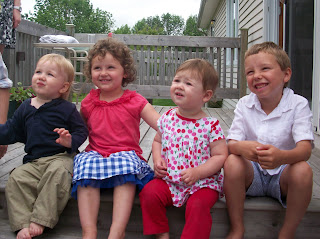 Cale, Lauren, Monica and Malcolm together at last!
Posted by Ashley at 6:55 PM 3 comments:

First things first, Caleb used the potty this week! We have been introducing the idea to him for the past few weeks and each night we spend some 'no diaper' time as he gets on and off of the potty while saying 'psssss'. One night this week he was in his pjs, ready for bed when he starting saying 'potty, potty', so I let him get undressed and sure enough he ran to the potty and peed!! All three of us cheered and clapped and Cale was beaming with pride. He hasn't repeated the performance, although there have been a couple of peeing on the floor right beside the potty episodes, but I think we are making progress. On the weaning side of things, not so much, but more to come on that later. 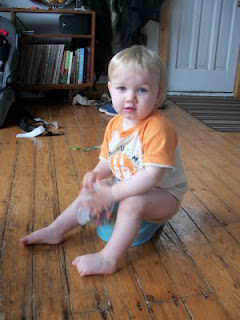 Hanging on the potty
So today is father's day, and Alan is away playing with his bluegrass band in NB. My parents were here visiting for the weekend and they were impressed with all Caleb's new words and tricks. A favorite is asking him to make a 'funny face'. As Alan says, his Jeffries funny bone is starting to come out! 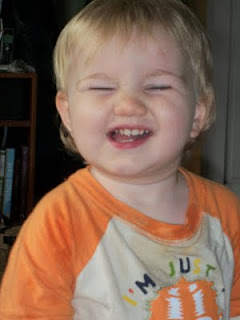 Funny face
Although Caleb won't see his dada today, I did get a new book called Daddy's Big Helper that we will read tonight. Caleb favorite things are listening and dancing while his dad plays guitar, touching his dad's beard and trying to help his dad with little household chores. He couldn't contain himself watching Alan mow the lawn the other night so I had to let him loose to go help his dad. Caleb is so lucky to have such a wonderful father. They still get to spend one day a week together for 'daddy daycare' and I think it is a day they both really love. Alan, we'll have a nice pancake breakfast for you tomorrow morning, after we let you 'sleep in' until 8:00! Times have changed, but in many, many ways times have never been so good. 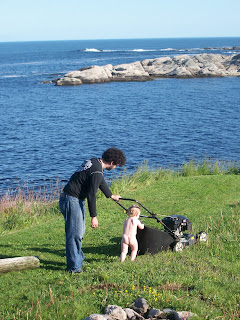 No time to get dressed when there is work to be done!
Posted by Ashley at 9:45 AM 2 comments: 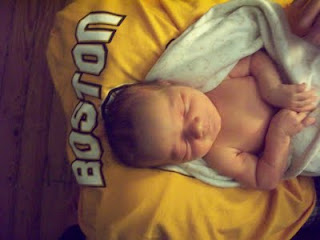 3 day old Caleb pledges allegiance to the Bruins
Posted by Ashley at 6:19 AM 1 comment: 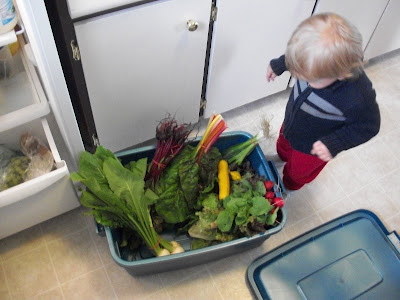 Cale helps us unpack our load
Today our first ever delivery from a CSA (Community Supported Agriculture) arrived! CSAs work by community members paying a farmer in advance for a weekly delivery of local, organic fruits and veggies. I've been wanting to join a CSA for a couple of years, so when I found out that Ironwood Farms would be doing a drop off at my work, I jumped on the chance to join. The growing conditions haven't been the best, so there isn't too much diversity in the first delivery, but in weeks to come we can expect carrots, tomatoes, berries, tons of greens, peppers, root vegetables and much more. I can't wait! I realized how much I have to learn about local produce. Since getting home I have already googled 'how to eat a turnip' and 'can you eat the green tops of radishes'. I think we will be cooking a lot of soups and stews this summer! Maureen - I'll be emailing you tonight for your rhubarb muffin recipe!! 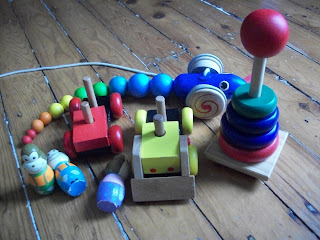 Wooden toy assortment
Eating local and organic is one step we are taking to try and live an all around healthier lifestyle with less of an impact on the earth. We are already quite environmentally conscious, but there are a few things that I have been wanted to change. I'm concerned about the amount of toxins in our environment - both because everything ultimately ends up in the water and living right on the shore you can't help but picture everything directly draining to the sea, but I also want to limit Caleb's exposure to toxins and chemicals. We try to keep less plastic toys in the house and go for wooden ones instead. I know that the standards are higher for children's toys nowadays, but we still hear of high lead levels and BPA, and since everything still goes into Caleb's mouth, I feel much better about avoiding plastics when I can. We are also trying to use more natural cleaning products, like baking soda and vinegar. I'm going to buy some borax this week to give that a try on the hard water stains in our tub. I'll post a before and after if it works! We are about to do a quick clean tonight before the big hockey game starts. GO BRUINS GO!!
Posted by Ashley at 7:13 PM No comments:

Caleb is truly feeling better the past couple of days. Once again he is all smiles, full of energy and talking up a storm. I followed him around with a camera for a few hours this past weekend to try and capture some of his words. I missed some key ones like 'hug please', 'hockey stick' and 'upside down', but did manage to capture a couple of goodies, and you may notice that 'no' has become a recent favorite. I realized, however, when I had to add subtitles to some of the footage, that he may not be quite a clear as I thought! He can say the ends of words really well, but 'ock' could be sock, rock or walk. He is great at names, if I do say so myself. Greggy, Linda, Grampie, Grammie, Nina, David, Lydie and Aly all come out on a regular basis. We often look through family pictures so he can say Mary and tonight he said Adam about 200 times. Saying Sarah seems to have really stumped him, though! A few words like fish, cheese and orange are pronounced as specific grunts which took us awhile to figure out. I love that he tries to say everything and seems to remember all the words he is learning. I gave him a bite of ice cream over the weekend and this morning I asked him what he wanted for breakfast and of course he piped up with 'ice cream'!!

How Caleb emerged from his room this morning 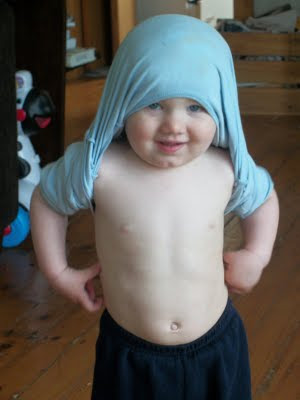 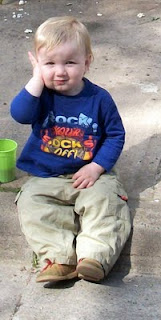 My ear still hurts, mama
After 10 days on antibiotics, Caleb is still not quite back to his old self. He has been a bit grumpy, has low energy, wants to nurse often, has a bad diaper rash, is not sleeping well and is tugging on his ear a lot. We went to see our doctor today to see how his ear is healing, and unfortunately, it is still very red and infected. So, we are now on round 2 of a different antibiotic. I feel so mixed about this. I was really hoping that we wouldn't have to use any antibiotics until he was much older, let alone using 2 different antibiotics in 2 weeks, but I know he is in pain more than anything I just want him to get better. What is a mom to do? I don't think there are many alternatives and I just don't want to risk the infection getting worse or spreading, so we'll be doing drops twice a day for another 10 days.

Caleb has had his moments of being in great spirits, and thankfully, he was in a super positive mood when I brought him to my work party. The Ecology Action Centre is celebrating it's 40th anniversary with 40 Days of Action. Yesterday was the 40th and final day and we celebrated with a street party. Music, food, and the unveiling of an art installation on the outside of our office. Caleb was the hit of the party. Dancing, laughing, drawing with sidewalk chalk and throwing his hands in the air and yelling 'party!!' several times. 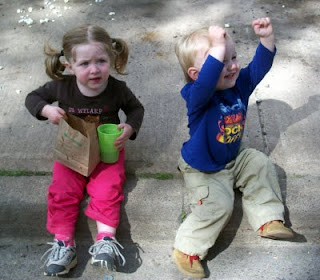 'Party!'
We also had a fun play date with our friends Rae and Gus this morning, where we spent an hour chasing each other and rolling in the grass at the Commons. 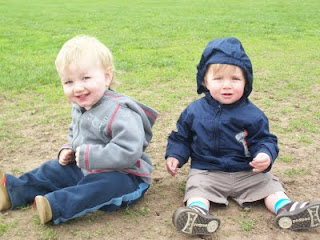 Caleb and Gus taking a break from the games
I'm really happy to say that the film I've been working on for the past few months is complete! Voices for our Coast is the final product. A 10 minute call to action from the people of Nova Scotia! It has over 400 hits on youtube so far and we held 2 screenings which went really well, so I'm happy people are enjoying it. I hope that this will help move our campaign of protecting Nova Scotia's coasts forward. You can watch the video here. Enjoy!
Posted by Ashley at 2:40 PM 2 comments: