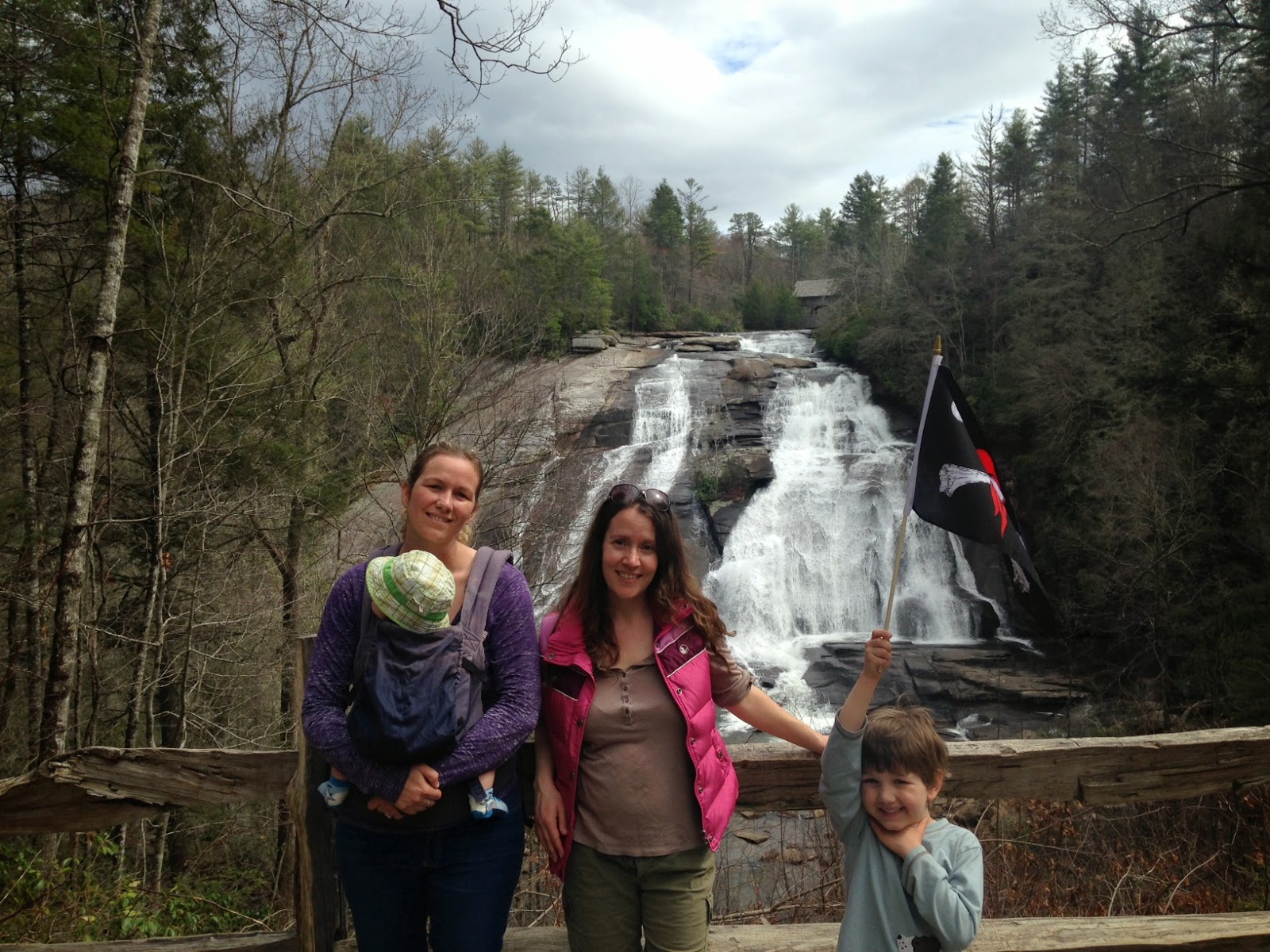 Pisgah National Forest is the 'Land of Waterfalls'. Hiking with Carolyn (and Cale's trusty pirate flag)
From North Carolina, we continued on through Tennessee and into Virginia on route to Washington, D.C. We knew Caleb would love seeing the national monuments and especially the wonderful Smithsonian museums. Most people may not be willing to take a 6 month old and a 5 year old into a big city for a day of viewing museum exhibits, but it was well worth the journey. Cale was ecstatic to ride on his first subway, and then he whole-heartedly absorbed as much as he could at both the Air and Space Museum and the Natural History Museum. He is such a sponge and now officially knows more than I do about outer space, rockets and satellites!

The thing I am enjoying most about our trip is the time we are spending together as a family of 4. This is our first chance to just be together for an extended period. Each day we have so much time to talk about things, laugh, play, cuddle and make memories that I will always treasure. I'll miss this feeling when we get back to our regular life next week. 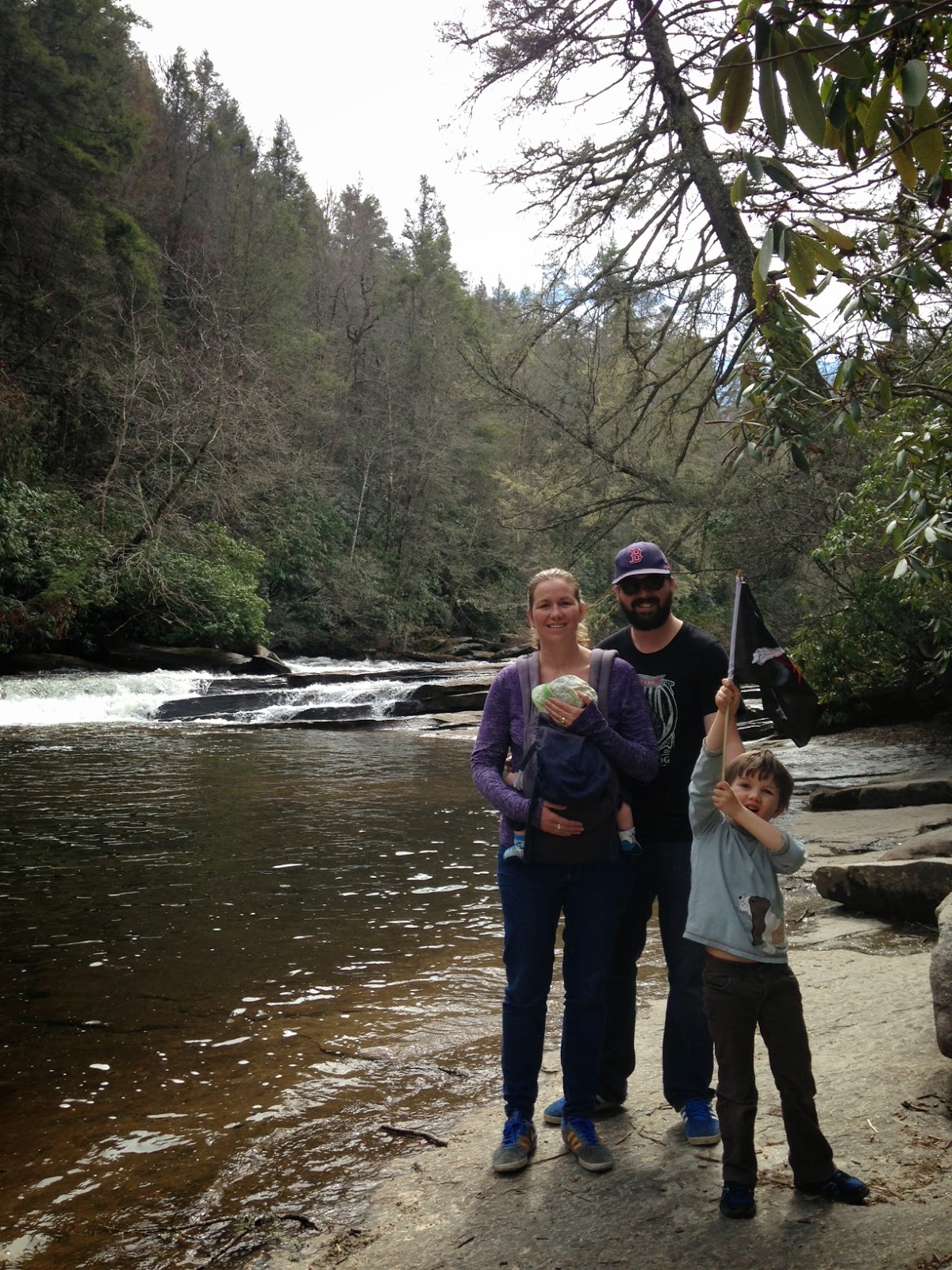 Georgia on my mind

Hello from Hilton Head, South Carolina! We've crossed a few state lines and now have some real miles under our belts. We left Kissimmee heading north and made it as far as St. Augustine where we spent two days in the sun. We found a beautiful State Park (Anastasia) where we played on the beach,  ate some frozen bananas and did some hiking. On Cale's insistence, we stopped to read all the local vegetation signs along the trail which makes the scientist in me smile. 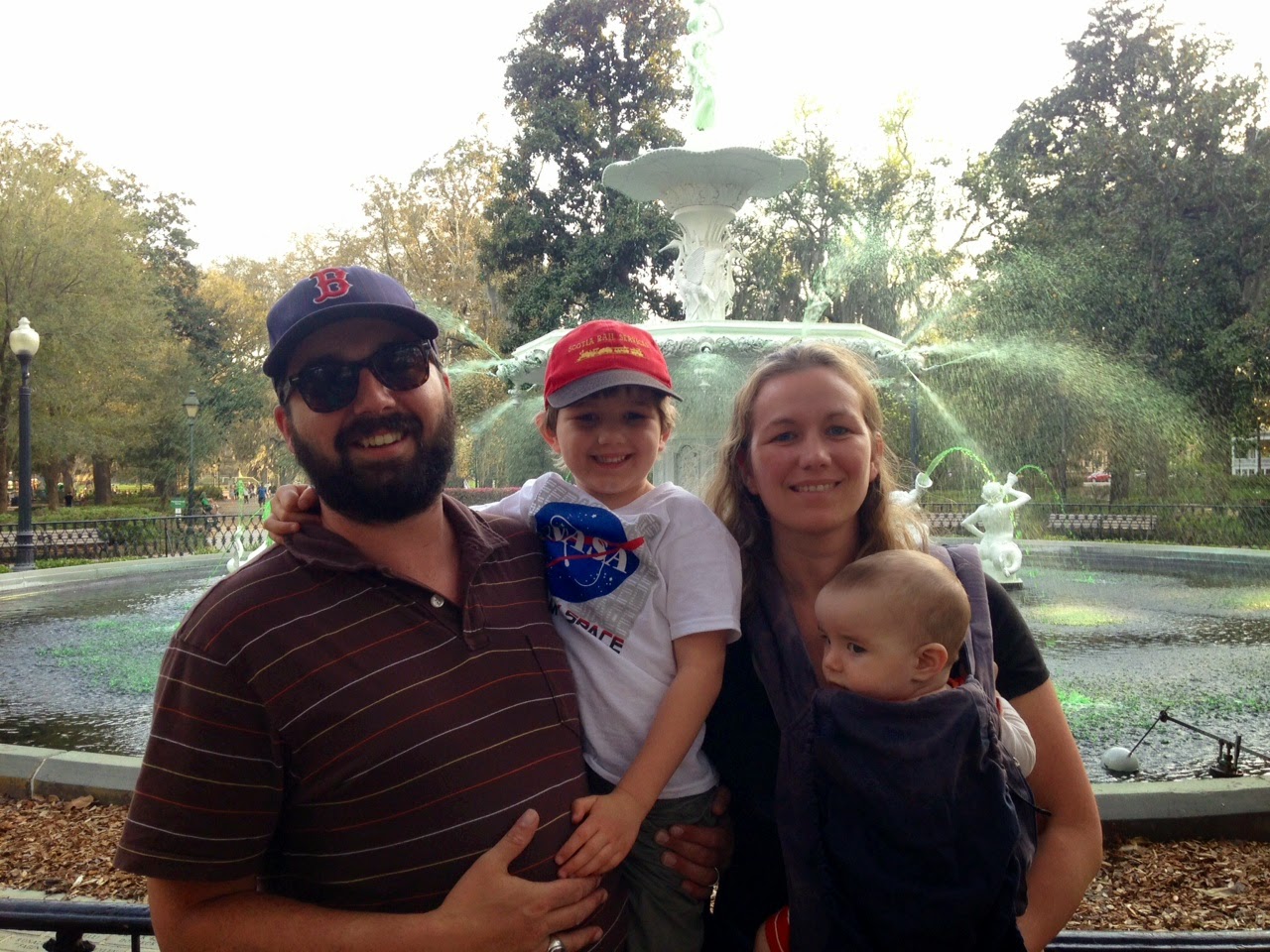 We then headed to Savannah, Georgia, where we unknowingly found ourselves in the midst of the 2nd largest St. Patrick's Day celebration in North America (second only to NYC). We stayed a few miles outside of the historic downtown core, and there was no way we could have gotten any closer. We waited until the parade was over after dinner before we ventured into town and saw the remnants of what looked like a really great party. Literally every person we saw, adults and children alike, were decked out head to toe in green and most had half drunken, sun-burned smiles on their faces. We took a wrong turn heading into town and ended up at an amazing park in the centre of town where even the water in the fountain was green! One of favourite things about road trips are the little mistakes like these that turn into beautiful memories. Savannah was one of the spots that many people had recommended we visit, so we spent the morning touring the waterfront before continuing on into South Carolina.
We are quickly coming to terms with the fact that Odin is basically the one in charge on this trip. As much as we might like to wander around parks and towns for hours, or push on and drive to a distant town, we are traveling on Odie time. We need to work around his schedule, making sure he gets adequate naps and doesn't spend too long in the sun or cooped up in his car seat. Speaking of car seats, Odin is not a fan of his. There have been tears, many, many tears while we drive. Basically we cringe and try to bare the screams until he falls asleep and hope that he won't wake up until we get to where we are going. It definitely is a challenge, and I'd like to say that each day gets better, but we only drove for 50 minutes today, so it is hard to say. The second we take him out of said car seat, he is a delightful little boy, grinning and charming everyone around him.

Thankfully, Cale is perfect. We couldn't ask for a better traveling partner for a road trip like this. He can easily spend hours in the back seat listening to music, asking great questions and drawing in his travel journal or making 'tickets' for each of us to get into an upcoming party that will begin when we arrive at the next hotel. Today was a 'Family on the Road' party which came with a very detailed $5 ticket that allowed each of us to bring 5 people with us. Very generous! Cale is also an amazing backseat big brother. He gives us updates on how Odie is doing, passes him toys to play with and doesn't let the tears get him down at all. He may ask for us to turn up the tunes to drowned out the cries, but other than that, he is just taking it all in. We reward him with as many play ground stops as we can find. We are basically on a play ground tour of the USA, and we're ok with that!

We are officially on the road! After spending a wonderful 5 days in Cocoa Beach, Florida with Greggy and Linda, we have set off to explore the East Coast. Our Honda Accord is jam-packed full with winter clothes, summer clothes, diapers, lego, craft supplies, books, swim wear, picnic essentials, a cooler and ourselves!
I flew with the boys from Bangor to Sanford on Monday. Alan dropped us off at the airport and drove (almost straight) for 24 hours until he reached us. He stopped in Virginia the first night and made it to our condo on Tuesday just after the sun had set. I thought he would be slightly delirious from the solo trip, but he was in great spirits and ready to join in on the family fun for the rest of the week. What a trooper. Made me feel like we were young and head over heels in love all over again! I think Alan and I are especially excited about this trip because we did a similar road trip in 2003, almost 12 years ago to the day. We crossed all through the States and Canada in a Dodge Caravan that we had decked out into a camper. That trip brought us some of our happiest memories and convinced us both that we wanted to spend our lives together. We've always dreamed of retracing our route with our family one day, and although we aren't crossing the entire continent this time, we are finally on the road, making memories with two little boys in tow. This trip, we'll be trading in the camp sites for hotels and play grounds and laundromats, but the magical feelings of the unknown adventures that lie ahead have already started to take hold.
There was so much to see around Cocoa Beach - the Brevard Zoo was a huge hit and Cale fed both a sting ray and a giraffe out of his hand! The highlight of the trip so far was visiting the Kennedy Space Centre which is truly an amazing facility. That same night we were lucky enough to witness a NASA rocket launch, which we woke Cale up for at 10:45 pm to watch from our beach. He was over the moon (no pun intended!).

After leaving Cocoa Beach, we spent a wonderful day and night with Alan's uncle Neil, aunt Sue and cousin Jason in Kissimmee. Odie is recovering from yet another ear infection, so it was great to have a home base for him to rest up before we start really putting the miles on. Cale is a little unsure about leaving Florida. He wasn't sure if it would still be warm if we drove to Georgia, and he's proclaimed that he'd much rather be swimming in a pool than playing in a snowbank. 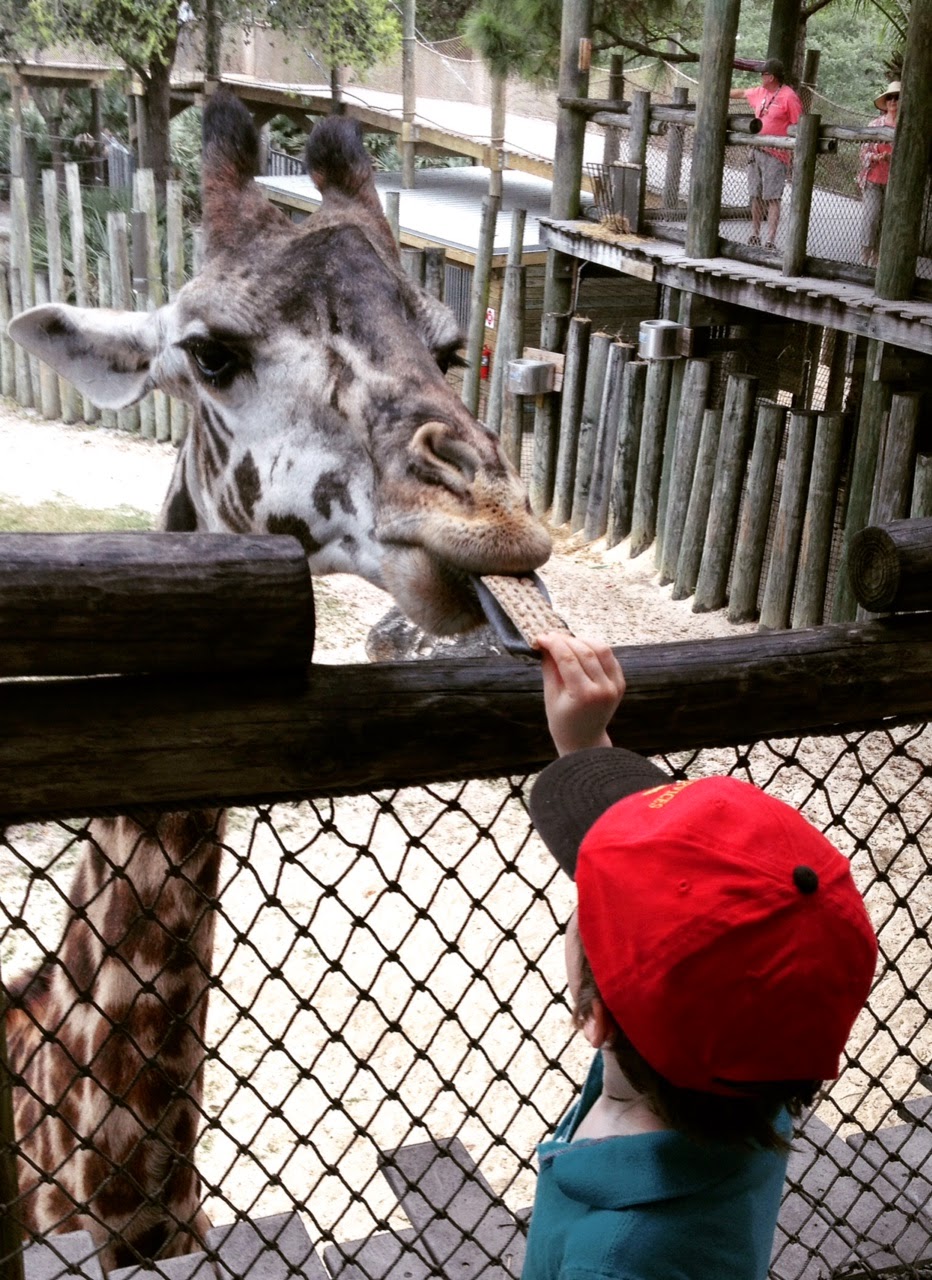 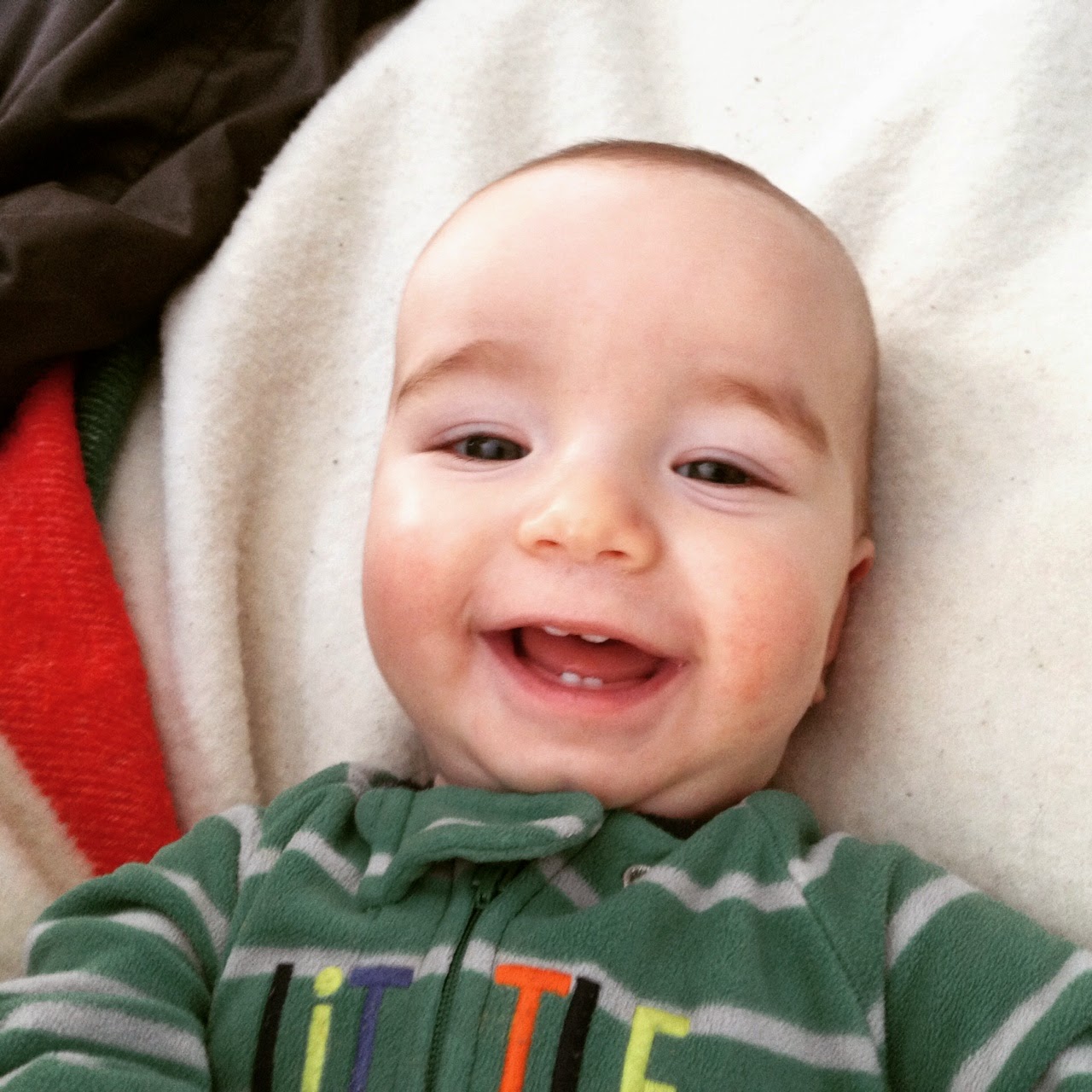 Ahhh! Half of a year has already come and gone! Wow. I feel like I need to take a deep breath and just soak it all in for a minute. Odin Alistair Jeffries, my scrawny little baby, is turning into a handsome, strong and adorably chubby boy right in front of my eyes. His 6 month doctor's appointment revealed that he is just shy of 18 lbs, and is continuing to perfectly follow the 50th percentile growth curve. We are beginning to uncover his personality as each day he reveals new glimpses of who he is going to be. He is his own little fella, that's for sure.

I can't help but compare him to Caleb, but as Alan said the other night, we are dealing with a whole different beast here. It's so true. At this early point in his life, Odie seems quite rough and tumble, and very, very independent. He is at the stage where he loves to be surrounded by toys so that he can taste each one individually, then throw it on the floor. I remember Cale dropping toys, but Odie actually puts some muscle into it and throws them down to the floor. I've said out loud, on more than one occasion, that he has a really good arm! He loves to eat solid foods, but only if he is holding the spoon by himself....at 6 months! It's like he let me feed him for one day then decided, "It's ok mom, I can take this from here.' (See video below). He also has learned a new sound that he's been practicing on repeat for the past few days. It is a blowing sound that is basically a 'pfffft'. So for the past few days most of our conversations have been followed by a baby saying 'pffffttt...'. It's as if he is completely dismissing what we just said, and it makes it pretty hard to take anything seriously.