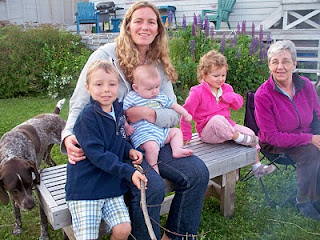 Caleb had his first meeting with cousins, Malcolm and Lauren, Aunt Kim and Uncle Jim who came to visit us from New Hampshire this past weekend. Along with Grammie and Grampie J. and Sarah, we had 7 adults, 3 kids and 2 dogs spend the night! Bonfires, beaches and watching ships (and even a submarine) go made for a wonderful family visit. Malcolm was super impressed with Alan's studio and showed us all the beats he has been learning on the drums. We also ate lots of local produce and a chicken raised by Teresa on the farm...delicious summer meals. Kim also brought a big tub full of hand-me-down clothes for Cale which means we have a whole new wardrobe of 9M +, including a new Hawaiian shirt and a couple great corduroy jackets. Cale is going to be a well dressed little boy. 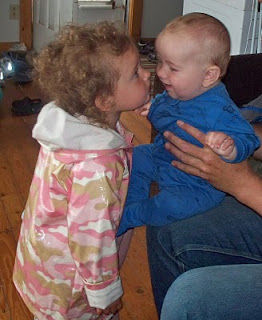 Cale loved getting kisses from Lauren 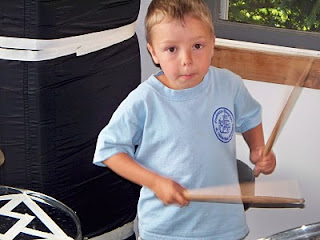 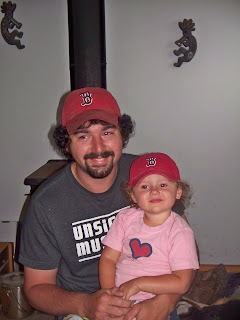 And another new discovery... 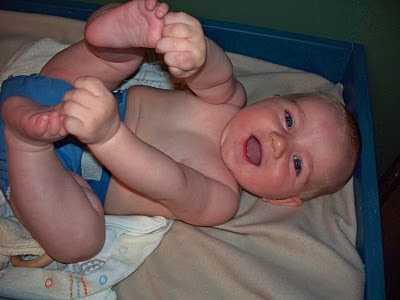 .....Toes!!
Cale also loves grabbing noses, lips, cheeks and anything else he can get his hands on! Usually it is my face that gets the squeezes, but if it means my little guy is becoming coordinated - I'll take it!
Posted by Ashley at 8:31 PM 2 comments: 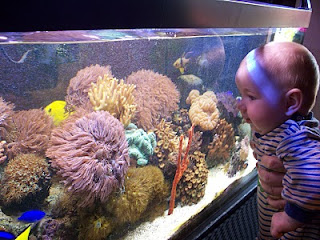 Caleb amazed by a salt water aquarium in Eastern Passage

I must admit that I wasn't overly consistent with putting Cale to bed without being fed while I was back in Fredericton. I basically reverted to nursing him to sleep, which wasn't a big problem until I wanted to spend an evening with friends and Cale refused to go to sleep for my parents until I got home at 11:30. I felt more than a little sheepish when I had to break the news to Alan that we had to go back to square one on the 'sleep training'. So now that I'm back home we are trying again to help him fall asleep on his own. This is not an easy task, but we are giving ourselves 3 days to work on the 'pick up -put down' method and hopefully he'll be falling asleep on his own by the weekend. Alan is doing quite well as I write this, actually, so fingers crossed. If any moms out there have advice on helping babies fall asleep on their own, please feel free to pass it on!
Now for my latest nature discoveries! While out on our walks I am always on the lookout for birds, but lately I can't help but notice all of the flowers that are in bloom. This week I found two new beautiful orchids in the bog near our house - the Snake Mouth (Rose Pagonia) and the Pink Grass. I didn't realize how many species of wild orchid we have in the Maritimes. I'm sure I'll keep finding more as the summer progresses. 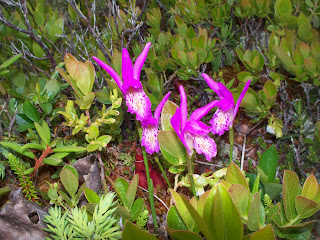 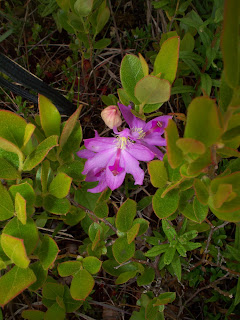 The Pink Grass Orchid
Posted by Ashley at 1:07 PM No comments: 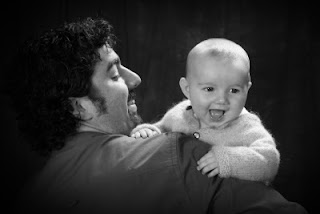 After being in Fredericton for 10 days, we are back in the Cove just in time for Father's Day. Cale was all smiles when Alan walked in the door, and was especially interested in touching his facial hair! Alan immediately noticed how Caleb is so much more aware of his surroundings. He wants to touch, taste and explore all new things that come in his path and loves making us laugh with his new repertoire of sounds.

In early June we did a photo shoot with Aunt Sarah at the Sears Studio in Halifax and I was able to pick up the photos this weekend. Sarah did an amazing job and we had a great time at our first photo shoot! Here are a couple of my favorites.The family portrait is being mailed out to family members tomorrow! 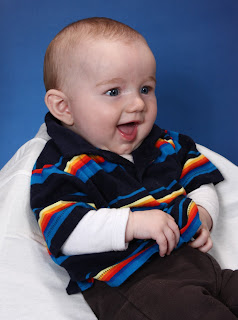 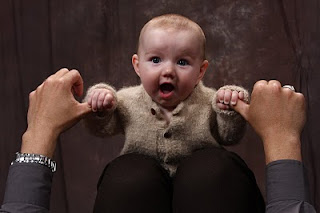 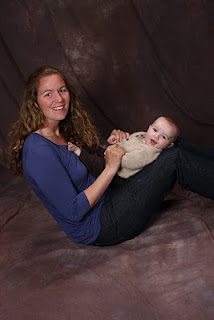 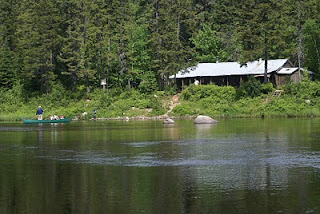 This weekend Caleb and I spent the night on the Mirimichi River at 'Moosecall', my father's fishing camp. My dad, uncle Adam, cousins Aly and Ava and Uncle Mike joined us on the trip. I'm sure Caleb holds the record for youngest person to ever visit the over 100 year old camp. The girls caught some trout, we saw a couple of moose (including a mother and young calf), made smores around the fire and Caleb had his first ride in a canoe. We were also very excited to unveil Caleb's beautiful mackinaw jacket and pajama combo. We are having a great visit in Fredericton, but we all miss Alan very much. We can't wait for our reunion on Father's Day. 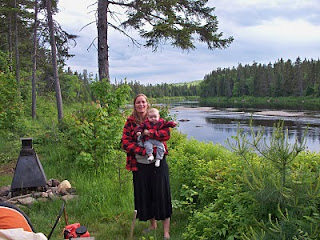 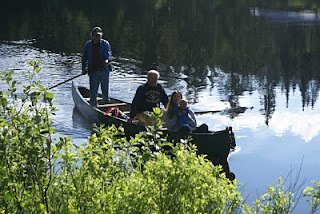 Posted by Ashley at 9:29 AM No comments: 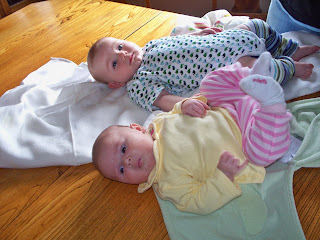 Caleb and I are back in Fredericton and we finally got a chance to spend some time with cousin Monica when both babies were awake and happy. I have been waiting to take some photos of the two of them together. I can see us pulling these out in 2028 when they graduate high school! 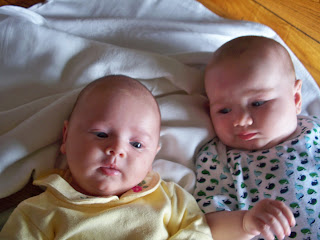 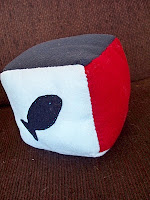 I have never been a sewer. A failed attempt at making a nighty in junior high home ec left me somewhat scarred. I thought I was doing so well, zipping right along on the sewing machine, that I was genuinely surprised when I held up the finished product and realized I'd managed to sew the neck closed! It looked like a giant pillow case with arms! Not my proudest moment. I think Home ec was my worst grade in all of junior high! It probably didn't help that Lydia and I also got in trouble for eating an entire box of Ritz crackers that were supposed to go into a recipe...but Ritz have always been a weakness of mine!

So I was a bit unsure when I decided to look up easy hand sewing projects I could make for Caleb. I decided the baby blocks looked simple enough so I headed to Fabricville to pick up some felt and spent my free time today working away. I must say, I'm quite happy with the result. The corners aren't exactly square and as long as you don't look too closely at the stitching, I think it turned out ok! Maybe there will even be more blocks to come! I don't know that I'll be able to branch out much further than that, but we'll see.

On the sleeping front, we've had some major improvements. Caleb has had a 6 hour stretch of sleep for the past 3 nights. He wakes up every 2 hours or so after that, but the nights are much easier and I feel much more rested. I had a chance to talk to a few other moms at the 'Rock n Rhyme' class we went to today and they all had similar stories of frequent waking at 4 months. The class was great, lots of moms and babies singing songs. Caleb was quite enthralled. I'll try to take a photo during next weeks class! 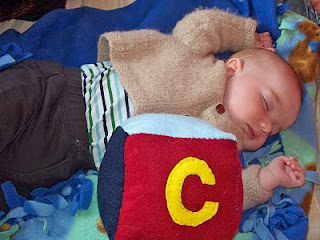 Having a nap with his new block!
Posted by Ashley at 5:18 PM 5 comments: 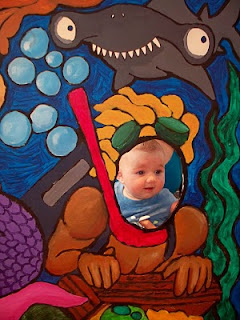 I took Cale to town today to take part in the celebrations for World Oceans Day where he was introduced to many of my old colleagues. People especially enjoyed his 'keep our oceans clean' t-shirt. I'm trying to stay updated on all the ongoing marine conservation work happening during my time off from CPAWS. One very exciting development is that Parks Canada is currently conducting a study of the Bay of Fundy to look for a potential area that could be designated as a future marine park. This is something I have been working very hard to promote over the past few years by raising awareness on the benefits of marine protected area in fishing communities and talking to Parks Canada about the need for more protection in the Bay of Fundy. I'm so glad to see this is moving forward.

Some of you may know that the Bay of Fundy is also a finalist in the 'New 7 Wonders' contest, alongside the Great Barrier Reef, the Brazilian Rainforest and many other incredible places. The Bay is the only Canadian site. Because it is Oceans Day, it would be great if anyone reading this wanted to take a few minutes and vote for the Bay in the 7 Wonders contest. You can vote here: New 7 Wonders Being named a finalist would truly help strengthen the case for increased protection in the Bay.
Thanks...and no, I haven't slept for 6 hours yet! 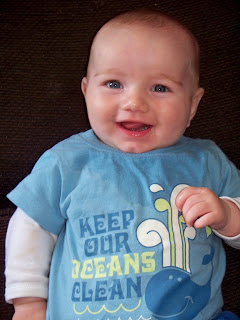 The art of slumber 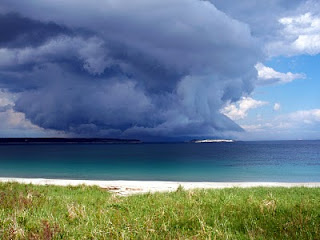 The starlings nesting in our roof have fledged. I was quite entertained watching a juvenile follow its mom around on our yard this morning while I was nursing Cale. The young bird would never stray more than a foot away from the mom and every time the mom pecked at the ground the young would be right by her side, mouth gaping wide open, hoping desperately for a feed. I can sympathize with the mother! Ever since Caleb's 3 month growth spurt he has been wanting to feed every two hours or less, 24 hours a day. This means the longest stretch of sleep I've had in over a month is about 1.5-2 hours. I've been managing surprisingly well, but after reading lots of books and realizing I was getting jealous when Arlo would let out a satisfied sigh while in a deep sleep, Alan and I decided it was time to try and make some changes in order to get Caleb to sleep more. 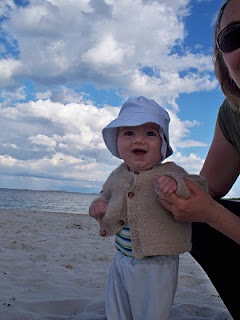 So happy at the beach - you would never suspect that he is not much of a sleeper!
We started our journey on Sunday. The first thing we needed to do was get Caleb out of the routine of eating before and after every nap. I think he would happily be nursed to sleep for the rest of the year, but it had become difficult for Alan to put him to down and we knew he couldn't actually be hungry every 2 hours, so we decided to eliminate the pre-nap feed. We also decided not feed him every time he awoke at night. I knew there was no way we could just let him cry it out, especially not at this young age, so we have instead just been rocking him, sshhhing him and patting him in our arms until he is almost asleep. We then place him back in his crib and stay with him until he is sound asleep. This way he is learning to fall asleep on his own, but still knows that we are always going to be there to support him. So far, this has been going very well. He seems to have no problem stretching out time between feedings and has been able to fall asleep without a snack. He still is waking up in the night, but not as often, so I'm hopeful that we are on the road to better sleep, for all of us. I'll let you know how we are doing in a few days time - hopefully with a blog titled 'I got 6 hours of sleep!!!'! 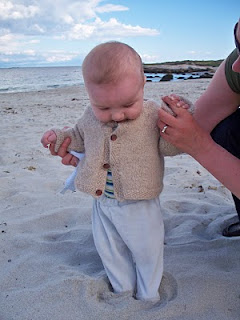