Caleb has had a few exciting things happen to him at school over the past few weeks. These stories speak to what a sweet and truly special little guy he is:

One day late last week I picked Cale up from his after school program and he was absolutely beaming. The moment he saw me the exciting news came bursting out -
"Mom - I won a contest at school!"
I was impressed, and asked what the contest was.
"It was for world breastfeeding week" He could still barely contain himself.
Hhhmmm, I was thinking, that sounded great but I needed to know more...
"Tell me about the contest..."
"I drew a picture and won first prize!!"
OK...wow! I was not expecting that, but I was still trying to sound very impressed. Now my interest was really peaked and my mind was racing, thinking what on earth did he my little boy draw to win first prize for world breasteeding week!!??
"What was your picture of?" I asked, somewhat tentatively, really hoping for a PG rated answer...
"A mother and baby whale".
My reaction was a mixture of relief, laughter and some head nods, thinking how cool it was that he thought to draw another mammal nursing instead of his ole mama!
We got home and he ripped open his bookbag and there it was - the prize winning picture (which turned out to be a coloring page and made much more sense!!), a family pass for the Y -and- he was most excited about seeing his name printed in the school's Monday Memo. "Caleb Jeffries First Place World Breastfeeding Week Coloring Contest!"

What an amazing, and very memorable, first honour to win at school!!

Caleb's second tooth finally fell out after it has been just barely holding on for the last week. The tooth fell out at school, during an assembly. Caleb was sitting quietly in the gym, when he his tooth fell into his lap. There was some pain, some blood, but because there was an assembly going on, and the rules are that you can not talk during an assembly, he didn't say a word.

He held onto his tooth, swallowed the little tastes of blood in his mouth, and patiently waited until the assembly was over before telling his teacher what had happened. He told me he even tried to clap along to the songs that were being sung, but he had to be very careful not to drop his tooth! What a trooper. And an obedient and respectful little trooper at that!

In other news, we now have a walker in the house. At least 50% of the time, anyway. Odin did a ton of practicing while Grammie Jeffries was here and he finally has the balance and coordination to walk across a room. We are thinking of dressing him up as a drunken sailor for Halloween and letting him stumble his way around to our neighbour's houses!

This year I am incredibly thankful for my wonderfully supportive family whom I seem to be depending on more than ever this year. We are still struggling to find childcare for Odin until he reaches the 18 month mark and can enter the only daycare in Annapolis Royal. Until March 1st, we have managed to line up a rotating circuit of family members who have generously offered their time and assistance and are traveling from away to watch Odin during the days while I'm at work and Alan is on tour. First up, my fabulous sister-in-law Sarah and her little boy Jack spent 3 nights with us. Not only did Sarah help with childcare and cook, she also took some adorable photos of the boys after Caleb's school photos didn't turn out due to an ongoing problem of overly-forced-smile-itis! Thanks, Sarah!

Next up was a week with Greggy who thought he was going to have a relaxing time in our sweet little town. Turns out, I had to travel for meetings the entire week, so I packed up both boys, met my dad in Truro and we headed out for 4 nights in two different towns, where the 4 of us shared one hotel room! What a trooper my dad was to agree to that..well he didn't actually know the plan when he agreed, but still, I was impressed! Thankfully the hotels had swimming pools and the weather was great, so the three boys had a wonderful time together. Thanks Greggy!

This week my mom and Aunt Colleen are with us in AR. Caleb is back in school after his week off and Odin is loving the attention being lavished on him by my music teacher mom and retired daycare worker aunt. Songs, games, 2.5 hour naps (which never seems to happen for me!)....it should be a great week. Next week, Grammie Maureen comes to the rescue for 4 more days until Alan finally gets home. Wow. It is exhausting to think about, but somehow we have all managed to pull it off again. I sincerely thank my family for their incredible support. Whether I ask them to come to Nova Scotia or Jamaica, they are always there for me (and probably wishing they were in Jamaica this time around!). Thanks mom, Colleen and Maureen!

And one more person I have to thank is my wonderful hubby who I miss very much. I can't wait for him to be home for a few weeks. Odin is growing and changing so much everyday, Alan will hardly recognize his little boy. Thanks Alan! 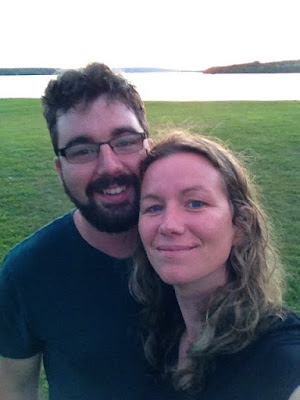 I was going to write a blog all about Odie, but then Caleb lost his first ever tooth! I sure hope the tooth fairy finds us in our hotel room in Antigonish tonight! 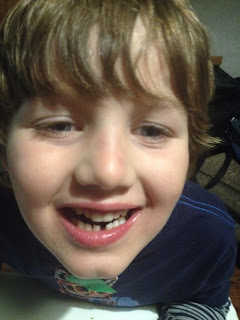 And now back to Odin...
At 13 months, Odin's personality is really starting to shine through. Not only is he an absolutely adorable and charming little boy, he is also turning into quite the little ham. (A mini John Jeffries, if you will.) He has added so much laughter to our home and it is wonderful to watch both of our little boys squealing with joy together. Most of the time, Caleb and Odin get along wonderfully well. Caleb is so patient and kind, and extremely proud of his little brother. But Odin is still a baby and he is a rough and tumble little fella at that. The only time Caleb gets frustrated is when Odin gets a little too curious about Caleb's many building projects. He loves nothing more than knocking over a tower Caleb that has intricately built...or dumping out a newly put-away box of toys, or pulling every single book off of a book shelf, or emptying the contents of a garbage can...you get the picture, I'm sure! I often find myself saying that we have one builder and one destroyer in the house.

Not only is Odin a one-man-wrecking-machine, we recently learned during his 12 month doctor's appointment that he is also a giant (which could be a helpful if he continues to pursue a career in destruction). He measured in the 99th percentile for height and head circumference, and 75th percentile for weight. We couldn't be more in love with our almost-walking, tower-crushing giant. Here he is trying a walker for the first time with Aunt Sarah.

Posted by Ashley at 8:04 PM No comments: