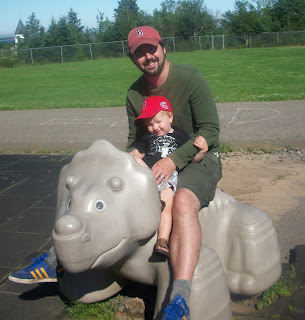 Today started out cloudy and cool, and poor Caleb had to go to the doctor to get his 18 month shots. I was surprised that he remembered the doctors office and immediately clung on to me and began to get teary. Things didn't get much better when the doctor attempted to weigh, measure and poke him with needles. But we got through it (75 percentile for height and weight - 29 pounds) and Cale cheered up quickly and managed to wave and say goodbye to everyone.

By the time we got home, the sun finally appeared through the fog and rain, so we decided to go on a family adventure to Hatfield Farm in Hammonds Plains. Alan played with his bluegrass band at a farm function a few weeks ago and came home saying that Caleb would fall in love with the many animals in the petting zoo. Sure enough, Caleb could hardly contain himself once he realized that we were actually going to be able to get up close and pat the animals. Whenever he sees an animal he always says 'pat', but it never really works out since we usually only see pigeons downtown or a wild animal on the yard. So today was the moment he'd been waiting for. He very kindly said 'hello' to all the animals and laughed and smiled as he touched the soft fur. A few animals even ate out of his hand which he really got a kick out of. All in all, it was a wonderful day and I know he wasn't thinking about his shots when he fell asleep tonight. 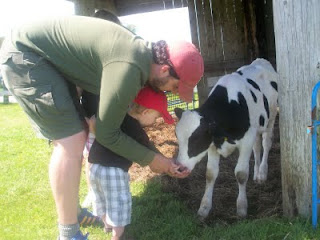 The calves were adorable 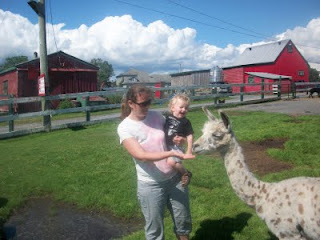 Laughing with an alpaca 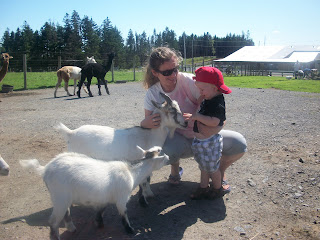 Getting up close and personal with the goats 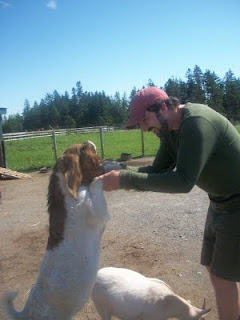 Dad even decided to teach one some dance moves

I'm so glad you are recording these wonderful experiences for Cale. Lucky boy and very lucky parents and grandparents!!