There's a new cowboy in town 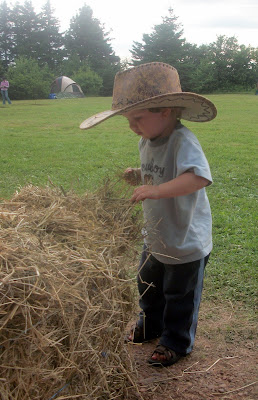 This weekend Caleb finally had a chance to see Alan play on stage. He hasn't been able to see his dada play since last summer, so I couldn't wait to see how he would react. We spent the weekend in PEI at the 60th birthday party for our friend Rheo's dad. About 100 people, all dressed up for the country-western theme, showed up to celebrate, and Alan and Rheo entertained with two rockin bluegrass sets and plenty of late night jams. To say Caleb was excited doesn't fully capture the mood. First off, he didn't nap at all (a first ever experience) and secondly, he was at a party and he looooves parties. He spent the first few hours running around non-stop, hugging people's legs, chasing other kids, chasing himself, rolling on the ground and of course yelling 'party!'. So by the time Alan came on stage, Caleb was already having the time of his life and seeing his dad play was icing on an already iced cake! Caleb danced and would cheer 'daddeeee' loudly at the end of every song. I was kept busy trying to foil his constant attempts to climb up onto the stage. Somewhere in the excitement someone handed him a ukelele, so here he was, instrument in hand trying desperately to be on stage with his dad. Rheo's grandmother finally yelled to me 'just let him go', so I did. Caleb was incredibly proud when he finally got up beside his dad. I was worried he'd get caught up in the cords, or try to make Alan lift him up, but all he wanted to do was stand there, play his ukelele and smile. I could just picture Alan as a toddler doing the exact same thing on stage beside Grampie John. So adorable. 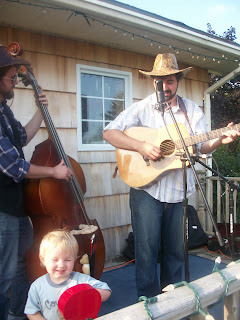 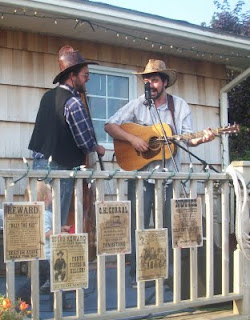 Can you spot the third musician (on the left)?

After Caleb finally crashed inside the house (thanks to dad's bedtime skills), Alan and I were both able to enjoy the party. Together. I admit at times over the past 18 months I've felt almost like a ghost of my former self - Alan is able to see our friends often while playing gigs, while I'm usually at home with the babes. So this weekend felt like I was really getting the best of both worlds - a super fun day with Caleb and then a super fun night with Alan while our baby was sleeping peacefully (something I couldn't have imagined even 6 months ago). I almost feel like I'm starting to figure this 'family life' thing out! 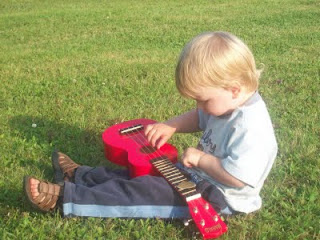 This was the only time he sat down all day
Posted by Ashley at 7:52 PM

The apple never falls far from the tree...

Caleb is proving to be more and more of a true "Jeffries" boy all the time.

I'm sure that makes dad and Grandpa proud!

that first picture of Caleb is the first one where my first thought was "whoa, that looks like Alan when he was little!!" So cute!

I know, Kathy! I'm starting to see more and more glimpses of Alan in Caleb, too.