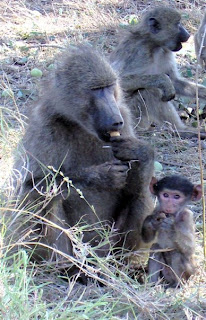 While staring in amazement at our little boy this morning, as we sometimes do, I asked Alan which animal Caleb reminded him of. He immediately said the baby monkey we saw in South Africa's Kruger National Park pictured above. This monkey was probably the most adorable thing we'd ever seen before Caleb came along! Cale sometimes reminds me of a wide-eyed seal pup, especially when he is swaddled! I don't think he will need to be swaddled much longer, however. We have been keeping one arm unwrapped this past week so he can suck on his fingers and soothe himself to sleep, which means he is well on his way to becoming completely swaddle-free. This will make my dad very happy, since he would rather see Caleb flailing his arms around than being the least bit constrained! 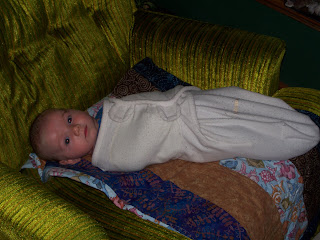 All swaddled up for the night! 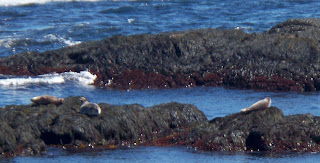 Seals hauled out on rocks in the Cove.
Posted by Ashley at 8:35 AM